The two sides of the US national anthem protests in the NFL | Sports| German football and major international sports news | DW | 25.09.2017

American sport and American politics have collided in a big way as protests during America's national anthem grow to new levels. DW takes a look at what the protest is about and whether it can be resolved. 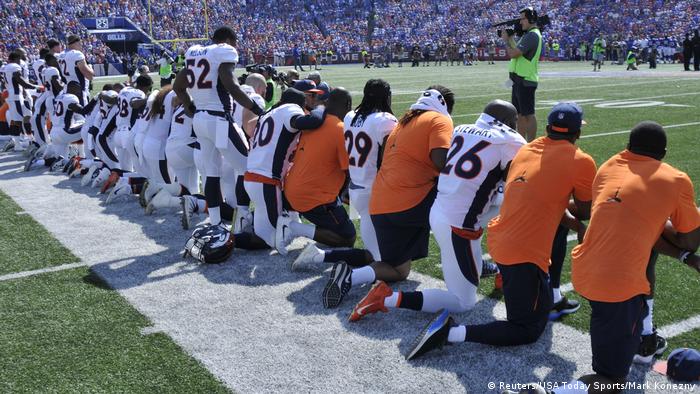 During his time in politics, United States president Donald Trump has used Twitter to have a go at politicians, world leaders and the American media.

His new target this past weekend was the National Football League (NFL).

During a rally in Alabama the American president condemned players for refusing to stand during the "Star Spangled Banner," America's national anthem, calling them "sons of bitches."

Since that rally, the Golden State Warriors, champions of America's National Basketball Association (NBA), cancelled their trip to the White House – a trip most championship sports teams in the US make. In the NFL, all but one player on the Pittsburgh Steelers team remained in the locker room as over 200 other players either sat or kneeled during the national anthem.

But what is the national anthem protest about? And why is the US president choosing to speak up about it? Here's a closer look at why the protest and Trump's comments have shaken the American sporting world.

Why protesting the national anthem matters

The "Star Spangled Banner" is played before almost every sporting event in the United States – from professional to college matches to high-school field hockey games and swimming races. At times the national anthem is projected through speakers, but often a singer belts out the tune.

Additionally, flag bearers often display the American flag during the rendition. That is partly why many people associate the American national anthem at sporting events with the US military – standing, removing one's cap and even singing is a way to honor them. 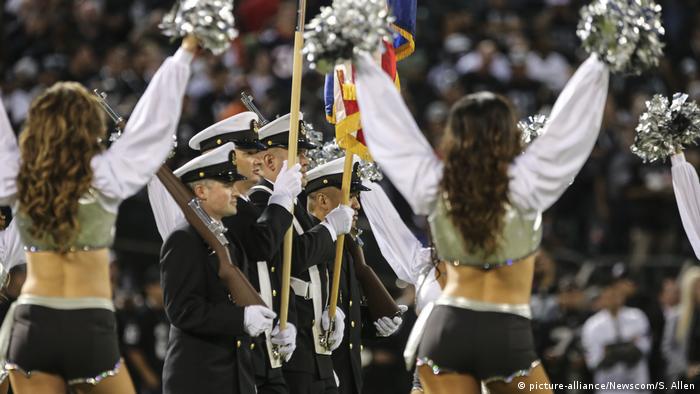 Protests in the NFL

The initial protest came before a preseason game in 2016, when then San Francisco 49ers player Colin Kaepernick sat on the bench while the American national anthem played. Afterwards, he said he did not want to "show pride for a country that oppresses black people and people of color," echoing sentiments of the "Black Lives Matter" movement condemning police killings of African Americans.

Kaepernick later modified his protest to kneeling rather than sitting after consulting with NFL and US army veteran Nate Boyer. Many other NFL players have since "taken a knee," as well as athletes in other American sports, in a show of solidarity with Kaepernick's cause.

The protest took center stage before the start of the 2017 NFL season after video surfaced of Seattle Seahawks player Michael Bennett being handcuffed by Las Vegas police in August. Afterwards, Bennett said, "I have always held a strong conviction that protesting or standing up for justice is just simply the right thing to do." 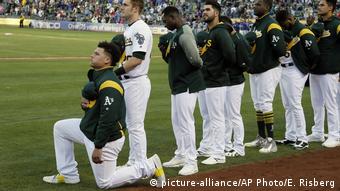 Now, in light of Trump's comments, the protest has exploded. Every NFL game of the past weekend saw players drop to one knee or link arms during the national anthem. Some teams even refused to leave the locker rooms during the "Star Spangled Banner."

Other sports got involved for the first time, too. On Saturday, Bruce Maxwell, a catcher for the Oakland Athletics who was born in Wiesbaden in western Germany, became the first player in Major League Baseball to take a knee during the national anthem.

Trump and the US military

Not all NFL players are on board with the protest. The only Pittsburgh Steelers player who elected to leave the locker room for the national anthem was Alejandro Villanueva, a former army ranger who served the US military in Afghanistan. 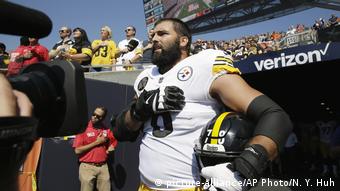 Alejandro Villanueva did not join his Pittsburgh Steelers teammates in protesting the American national anthem.

Some criticism has come from the NFL itself as NFL executives, according to American media, have a lot of angst towards Kaepernick. Former quarterback and television pundit Boomer Esiason, who won the NFL's Most Valuable Player award in 1988, said Kaepernick's actions were "an embarrassment."

But the greatest animosity has come from people in or associated with the American military, most of whom believe NFL players are being disrespectful by refusing to stand for the "Star Spangled Banner." Memes posted on social media condemning the protest are often military related.

So it's no surprise that Trump, who has former members of the military in his presidential cabinet and wants to increase military spending, is siding with the military on this issue.

But not all members of the military have a problem with the protest. Some may not agree with it, but respect the players' right to do so. After all, members of the US military swear an oath to the American constitution, which protects freedom of speech and freedom of expression.

No resolution in sight

Trump has remained steadfast in his condemnation of the NFL, posting more criticism on his Twitter account on Monday. He has also done his best to spread the Social Media hashtag "Stand For Our Flag."

But the reaction in the NFL on Sunday was an indication that this may not be a fight the US president can win. For their part, the NFL has condoned the protest since Kaepernick first did it, saying players "are not required" to stand during the "Star Spangled Banner." The MLB released a similar statement on Sunday after Maxwell took a knee.

With the 2017 NFL season still in its first month, these protests may just be getting started, and Trump could just be adding fuel to the fire if he continues his social media condemnation.