Captain Stephen Curry and his NBA championship team have decided to boycott their invitation to meet US President Donald Trump. This was the second time Trump earned the ire of a professional sports league in two days. 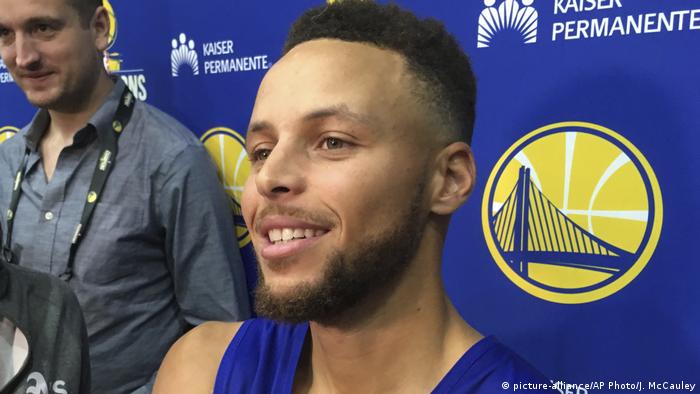 Reigning NBA champions the Golden State Warriors announced on Saturday that they will not attend the traditional visit to the White House after US President Donald Trump made inflammatory remarks toward team captain Stephen Curry.

"I don't want to go. That's the nucleus of my belief. If it was just me, it would be a pretty short conversation," Curry said of a possible meeting with Trump.

The Golden State Warriors have earned a reputation for being one of the most politically aware professional sports teams in the US, and the president's muted response to white nationalist violence in Charlottesville, Virginia is just one of many points of contention.

Curry said he wanted to boycott the visit in order to show people that "we don't stand for what our president has said, and the things he hasn't said at the right time."

In response to Curry's uncertainty, Trump tweeted: "Going to the White House is considered a great honor for a championship team. Stephen Curry is hesitating, therefore invitation is withdrawn!"

LeBron to Trump: 'You bum'

Before the Warriors could respond, basketball superstar LeBron James fired back at the president saying that Trump couldn't rescind an invitation that had already been declined, calling Trump a "bum" and adding that "going to the White House was a great honor until you showed up!"

Shortly thereafter, the Golden State Warriors announced that the entire team had turned down the invitation from the White House, and said they would use their upcoming visit to Washington for other purposes.

"In lieu of a visit to the White House, we have decided that we'll constructively use our trip to the nation's capital in February to celebrate equality, diversity and inclusion - the values that we embrace as an organization," the team said in a statement.

Speaking to a reporter later, Curry said it was "beneath…a leader of a country to go that route."

The NBA was the second sports league that Trump managed to provoke in just two days. On Friday, the president decried NFL football players like Colin Kaepernick, who famously knelt during the national anthem at games last year, as "sons of bitches."

Not about to take the insult lying down, Theresa Kaepernick responded:

The former San Francisco 49ers quarterback said he was kneeling and not singing "The Star-Spangled Banner" as a protest of police brutality against minorities. Although the NFL has been divided by Kaepernick's actions and largely remained silent on the matter, the president's tirade was considered so out of line that NFL Commissioner Roger Goodell felt compelled to condemn the statements immediately.

"Divisive comments like these demonstrate an unfortunate lack of respect for the NFL, our great game and all of our players," Goodell said.

North Korean leader Kim Jong Un has called President Donald Trump "deranged" and said he will "pay dearly" for his threats. The North Korean Foreign Minister later reportedly threatened to test an H-bomb in the Pacific. (22.09.2017)

North Korea’s Foreign Minister Ri Yong Ho has called US President Donald Trump's speech to the UN "the sound of a dog barking." Trump had said the US may be forced to "totally destroy" North Korea. (21.09.2017)

Donald Trump's ex-campaign head has called for an investigation into leaks after a CNN report that he was the target of an FBI wiretapping probe. Paul Manafort resigned from Trump's campaign amid reports of Moscow ties. (20.09.2017)