German chemical giant Bayer has suffered one of its worst losses in 16 years after a court ruled Roundup caused a man's cancer. The trial could now determine the settlement of hundreds of similar cases. 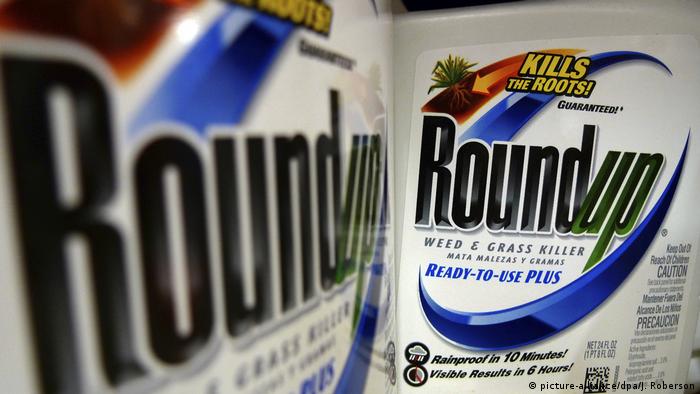 A US jury concluded on Tuesday that the Roundup weed killer was a "substantial factor" in causing cancer in a 70-year-old California man.

The ruling is a blow to Bayer, whose subsidiary Monsanto makes the herbicide. The trial could pave the way for more cases linking glyphosate in Roundup to the development of cancer.

Hardeman's lawyers said: "Now we can focus on the evidence that Monsanto has not taken a responsible, objective approach to the safety of Roundup."

Bayer, which acquired Monsanto last year, said: "We are confident the evidence in phase two will show that Monsanto's conduct has been appropriate and the company should not be liable for Mr. Hardeman's cancer."

Bayer saw its share price drop by more than 10 percent when trading Frankfurt opened on Wednesday.

Share price plunges: In the wake of the ruling, Bayer's share price fell more than 12 percent, before rallying slightly. Traders wiped €8 billion in value from the company, its biggest intraday loss in 16 years.

While critics are quick to describe glyphosate — the main chemical substance in Roundup — as carcinogenic, research is far from definitive on the question.

According to EU health authorities, "experts, with only one exception, concluded that glyphosate is unlikely to pose a carcinogenic hazard to humans and the evidence does not support classification with regard to its carcinogenic potential."

Studies commissioned by the United Nations' World Health Organization have delivered conflicting results, however one of those studies, conducted by the WHO's International Agency for Research on Cancer said it is "probably carcinogenic to humans."

Bayer questions that finding: "The IARC opinion is inconsistent with 40 years of scientific research on glyphosate. Among the four WHO agencies that have evaluated the safety of glyphosate, IARC is the only WHO entity to find an association between glyphosate and carcinogenicity," it said in a statement.

Last year, a judge in San Francisco upheld a jury's verdict that found Monsanto liable for a groundkeeper's cancer. The case is under appeal after the judge slashed damages from $289 million (€255 million) to $78 million.