A group of US soldiers has arrived in Iraq's western Anbar province to assess a site for operation. Their arrival comes at a time when "Islamic State" jihadist influence seems to be growing in the region. 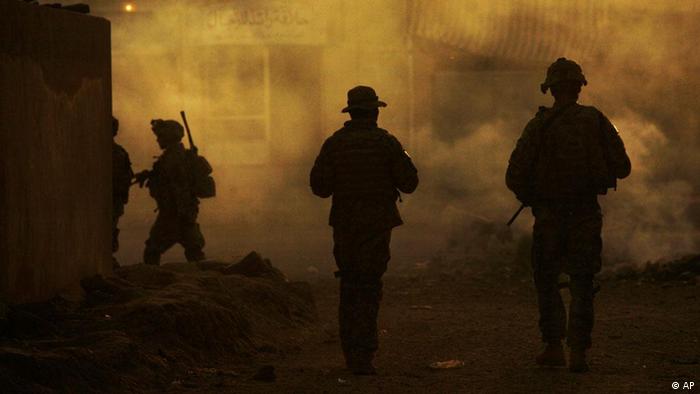 US forces have arrived in Iraq to offer support for ground forces in the fight against "Islamic State" (IS) jihadists, Washington announced on Monday.

Around 50 US military personnel have arrived at al-Asad Air base near Haditha "to conduct a site survey of facilities for potential future use as an advise-and-assist operation location" to support Iraqi government forces, Pentagon press officer Commander Elissa Smith told dpa news agency.

She added that the soldiers were armed only to protect themselves and that they would not be arming Sunni tribes in the region.

Nearly 1,500 US soldiers are currently in Iraq, mainly in Baghdad and Erbil, to protect US assets and advise Iraqi forces. Last week, US President Barack Obama approved up to 1,500 additional troops to train and advise Iraqi and Kurdish forces to fight IS.

The US-led coalition has been carrying out airstrikes on IS targets in Iraq and Syria for months, but the insurgents have nonetheless been able to push back Iraqi forces in Anbar province.

Meanwhile, Ansar Beit al-Maqdis, a radical Islamist al Qaeda-linked organization which has killed scores of Egyptian security forces, has vowed allegiance to IS, highlighting the latter's growing influence in the Middle East, despite its militancy and reign of terror on anyone not complicit with their ultra conservative version of Islam.

Ansar Beit al-Maqdis' announcement is the most significant show of support for IS in the region outside Iraq and Syria, and is indicative of its influence over the group's al Qaeda rivals, according to an analysis by the AFP news agency.

"They [Ansar Beit al-Maqdis] are suffering from lack of resources as Egyptian security forces besiege Sinai," Eman Ragab, an expert on regional security at the Cairo-based Ahram Center for Political and Strategic Studies, told AFP.

"Pledging allegiance to IS would help gain the sympathy of youths who could be recruited from other groups, or help get logistical support from IS itself."

In a recording released on Sunday, the Egyptian terrorist group said it had decided to join the IS, "whose emergence resembles a new dawn raising the banner of monotheism."

The recording said Abu Bakr al-Baghdadi, leader of the IS, had been "chosen by God" to establish a caliphate after "Muslims suffered decades of humiliation."

"Therefore we have no alternative but to declare our pledge of allegiance to the caliph [al-Baghdadi] … to listen and obey him … and we call on all Muslims to obey him."

The Associated Press reported that similar pledges of support from jihadist groups in Libya and Iraq had appeared online on Monday as well.

The IS seeks to install a caliphate in much of the Middle East. It already controls vast swathes of Iraq and Syria and has left a trail of destruction and brutal punishment and death for non-supporters in its endeavors.

German authorities are cracking down on home-grown supporters of the Islamic State jihadist group waging war in Syria and Iraq. Raids were made on the opening day of the country's second trial of an alleged IS supporter. (06.11.2014)