US-Taliban talks are back on, Donald Trump says in Afghanistan

The US president spoke of his desire to end the conflict in Afghanistan and said discussions were once again underway with the Taliban. Trump previously broke off long-anticipated talks in September. 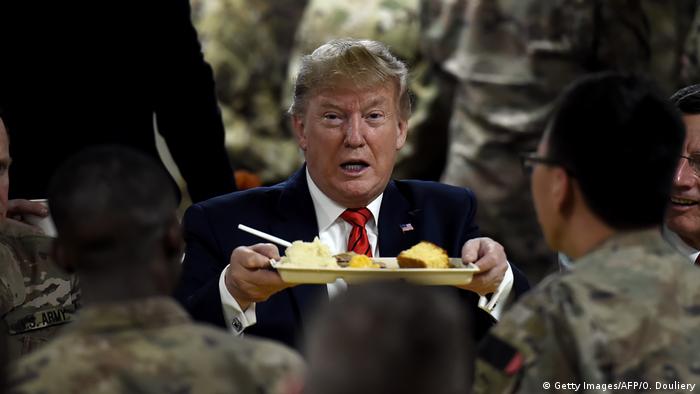 US President Donald Trump said on Thursday that talks with the Taliban resumed as he sought an end to the United States' longest war.

He made the announcement during a surprise visit to US troops in Afghanistan to celebrate Thanksgiving, even serving turkey to armed forces. Around 12,000 US forces remain in Afghanistan.

He spent around three hours on the ground and sat down with Afghan President Ashraf Ghani to discuss the ceasefire before leaving shortly before midnight. 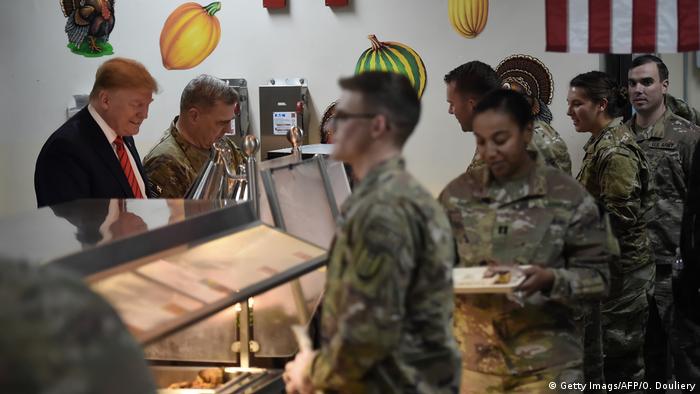 It was Trump's first visit to Afghanistan

The trip took place after Trump abruptly broke off peace talks with the Taliban in September. The president canceled a secret meeting with Taliban and Afghan leaders after a particularly deadly spate of violence broke out in Kabul. Twelve people were killed, including a US soldier.

The talks had been in the works for nearly a year, with the aim of reaching a political settlement between the US and the Taliban.

It is unknown how soon after that the fresh talks began, or how substantive they are.

Trump promised at his election in 2016 to put a stop to "endless wars" with US involvement.

It was the president's first visit to Afghanistan and comes on the back of a prisoner swap between Washington and Kabul that increased hopes for a peace talks revival.

Last week the Taliban released hostages American Kevin King and Australian Timothy Week to US forces in southern Afghanistan. The hostages, both university professors, were kidnapped in 2016 outside the American University in Kabul where they had been teaching.

After the Cold War ended, the world hoped for an era of peace. But things turned out differently. Now, 30 years after the historic fall of the Berlin Wall that shifted power balances, wars are more complex than ever. (08.11.2019)