US shale oil forecasts too optimistic, even IEA agrees | Business | Economy and finance news from a German perspective | DW | 14.11.2018

The fracking of hard-to-reach oil reserves has helped the US regain its crown as the world's top crude oil producer. But even the International Energy Agency (IEA) is now worried that the shale boom has been overhyped. 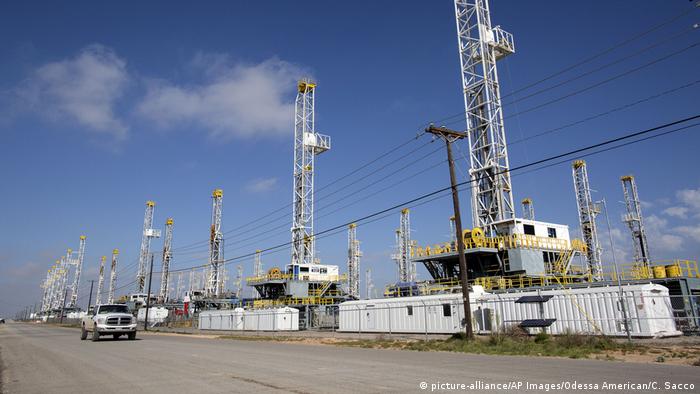 Since it first came on stream a decade ago, US shale oil has been hailed as the great black hope for a world still reliant on fossil fuels, despite the worsening effects of climate change.

Concerns about the depletion of Middle East oil reserves have been somewhat offset by the resurgence of US oil production, which last month reached 11.6 million barrels per day (bpd), up 20 percent on the previous year. That's already more than a third of the 32 million barrels produced globally per day.

The US, whose oil industry peaked in 1970s and was thought to be in terminal decline, has now overtaken Russia and Saudi Arabia to become the world's largest oil producer. Advances in fracking technology have made it possible to drill in tight shale in the North American Permian Basin, which lies under the US states of Texas and New Mexico, as well as further afield.

Permian is forecast to become the most lucrative oil patch in the world over the next decade, potentially overtaking Saudi Arabia's Ghawar field. Energy analysts Wood Mackenzie predicts the region will account for two-thirds of the increase in US oil production and contribute one-quarter of world's oil production increase over the next 10 years.

Although many oil industry insiders believe the US shale boom is so powerful it can plug a potential supply crunch that the International Energy Agency (IEA) has warned will lead to a global shortage of oil in the mid 2020s, others believe the expansion has been overhyped and that some of most lucrative shale wells may have already peaked.

Last month, Paal Kibsgaard, CEO of the world's largest oilfields services company, Schlumberger, warned that the most optimistic projections for US shale oil production may not be met.

Describing a shortage of pipeline capacity in the Permian Basin, Kibsgaard also cautioned over longer-term problems as producers drill so-called child wells in areas that have already been drilled [by parent wells]. He described how child wells are much less productive, but now make up more than two-thirds of all new wells drilled in two large US oil regions.

"The well-established market consensus that the Permian can continue to provide 1.5 million barrels per day of annual production growth for the foreseeable future is starting to be called into question,” Kibsgaard was cited by the Financial Times as saying.

The IEA has also warned of the hazards of relying on US shale to plug the shortage, adding that it would require a tripling of US tight oil production from today's level in just seven years. And while the Paris-based agency does see the US dominating the world energy market by 2025, it said in its latest report, released on Tuesday, "it would appear risky" to rely on such a drastic growth in oil production.

Another warning about the over-optimistic predictions within the oil industry came earlier this year from Mark Papa, one of the pioneers of modern day fracking or hydraulic fracturing — the technique used to drill for hard-to-reach oil. At an energy industry conference in Houston, Texas, in March, Papa warned: "The impression of US shale as the big bad wolf is perhaps a bit overstated."

Among his concerns were revelations that drillers in two other major shale regions — Eagle Ford in Texas and the Bakken in North Dakota — had already drilled through their most lucrative assets.

"My theory is that you've got basically resource exhaustion that is beginning to take place. It's no secret that you've only got three shale oil plays in the US of any consequence," Papa said, referring to Permian, Eagle Ford and Bakken. "The rest of them don't amount to a hill of beans."

The new black gold rush has seen hundreds of small and medium-sized energy companies plow billions of dollars into the main US fracking regions, which has led to overproduction. Rising labor and equipment prices, along with the cost of removing excess water and gas from wells has put even more pressure on oil producers, many of whom are under substantial shareholder pressure as they're still not profitable.

"They've managed to lose money in every oil price environment," he added, referring to the highly-volatile oil price over the past decade that, at times, has made shale production uneconomical.

"That's not a good business model," Martenson told his subscribers on YouTube.

Martenson believes oil prices would need to be twice their current price to fully support the shale industry long-term, factoring in damage to nearby transport infrastructure, while meeting environmental regulations, including re-plugging the wells, and dealing with waste water.

As well as being at the mercy of oil prices, energy efficiencies in existing gas (petrol) and diesel transportation, along with a speedier global transition to electric cars, could see demand for oil fall to such an extent that shale quickly becomes uneconomical again.

In its latest report called Shale Reality Check, the Post Carbon Institute backed up the assertion that the shale boom had been overhyped, adding that the US's Energy Information Agency's (EIA) forecasts were "highly to extremely optimistic," and therefore "unlikely to be realized."

EIA forecasts count on all proven shale reserves being recovered, along with a high percentage of unproven resources, by 2050.

"The nature of these reservoirs is that they decline quickly, such that production from individual wells falls 70 to 90 percent in the first three years," the Post Carbon Institute's report said.

The California-based environmental think tank warned that the overambitious forecasts are "a disservice to planning a viable long-term energy strategy."

Could oil nation Norway help save the climate?

The world may not be able to make necessary changes in time to limit rapid global temperature rise, the UN climate panel has warned. Existing emissions must also be captured and stored. Norway thinks it has the answer. (18.10.2018)

The International Energy Agency (IEA) expects the United States oil output to be higher than that of Saudi Arabia in 2018, setting the country on a course to become the world's second largest producer after Russia. (19.01.2018)