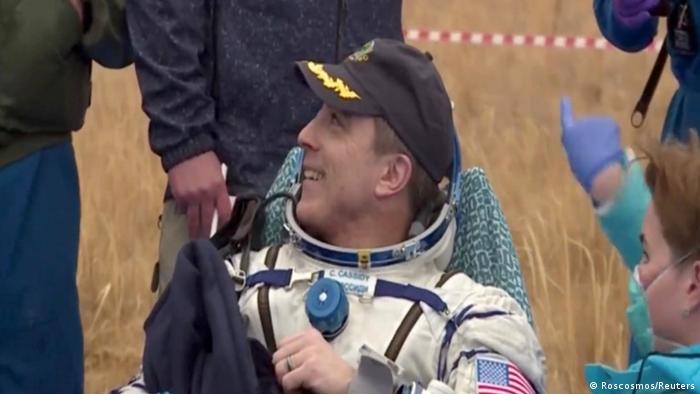 Their journey back to Earth from the International Space Station (ISS), in orbit around 400 kilometers (roughly 250 miles) above the planet, took about three hours and 20 minutes.

The trio spent 196 days, or about six months, in orbit since arriving on the station in April.

The three-man crew underwent brief medical checks soon after landing, although the recovery team meeting them was scaled back due to coronavirus measures. They were to be taken by helicopter to the Kazakh town of Dzhezkazgan before being flown home to Moscow and Houston.

Their departure from the ISS came as three other space travelers — NASA's Kate Rubins and Roscosmos' Sergey Ryzhikov and Sergey Kud-Sverchkov — began their six-month mission at the outpost last week. Their journey to the station lasted just three hours and three minutes, setting a new record for a manned spacecraft.

Rubins, Ryzhikov and Kud-Sverchkov are expected to greet four new guests who will be sent to the station aboard a rocket launched by private space company SpaceX in November.

Next year marks 20 years since the first crew arrived at the space station. There has been a constant human presence on the orbiting laboratory since then, but it's expected to be decommissioned in the next decade.

Crews have recently reported issues with the oxygen production system, a toilet and the oven for preparing food aboard the station. However, Roscosmos reported Tuesday that any problems had been "fully resolved by the crew."

"All the systems of the station are working well and there is no danger to the crew or the ISS."