Two Russians and one American reached the International Space Station (ISS) where they are set to start a six-month mission. Before the takeoff, the men were quarantined and not allowed to meet their families. 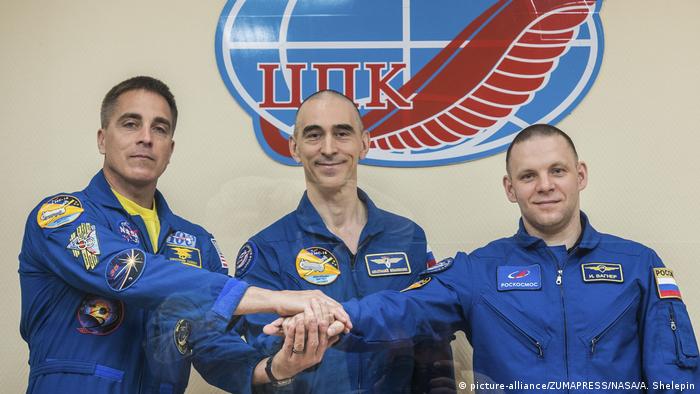 A pod carrying three crew members docked at ISS on Thursday, some six hours after leaving the Russian-controlled Baikonur Cosmodrome in Kazakhstan.

Cosmonauts Anatoly Ivanishin and Ivan Vagner, along with American astronaut Christopher Cassidy previously spent a month in quarantine to keep them safe from the ongoing coronavirus pandemic.

"We feel fantastic," Cassidy said during a press conference the day before the launch, which was televised but had no journalists present.

Read more: Work and live on Mars — Inside a new base developed for future missions

As an additional precaution, the astronauts were not allowed to say goodbye to their families in person, in addition to being isolated for one month before the flight, as COVID-19 took a global hold.

Cassidy said it was difficult for the crew to leave without saying goodbye to their families. "But we realize that the whole world is affected by the crisis," he added.

The three astronauts docked with the ISS's Poisk module after about six hours of spaceflight They join Expedition 62 Commander Oleg Skripochka of Roscosmos and NASA Flight Engineers Andrew Morgan and Jessica Meir.

Meir and Skripochka, who have been on the station since September 2019, and Morgan, who has been there since July of the same year, will all head back to Earth on April 17.

The ISS, which orbits Earth some 400 kilometers above it, has a mostly US and Russian crew. Its laboratory conducts scientific experiments that cannot be carried out on Earth's surface.

NASA's Christina Koch has returned to Earth, ending the longest spaceflight ever completed by a female astronaut. Koch spent nearly a year on the International Space Station. (06.02.2020)