Russia's foreign minister has called on the US to press Ukraine to stop its military operation in the east of the country. Hours earlier seven OSCE mediators were released by pro-Russian separatists. 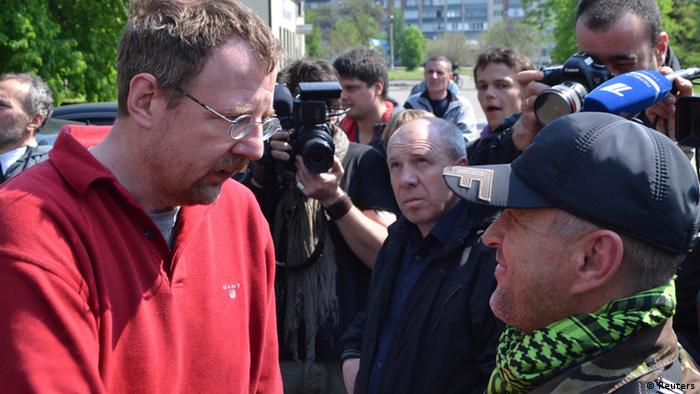 Russia's foreign ministry issued a statement on Saturday calling on the United States to "use all of its influence to force" the interim government in Kyiv to "halt military operations in the southeast, pull back its troops and free protesters."

Kerry said: "It is important for Russia to withdraw support for the separatists" and begin "to de-escalate the situation. We will both advance ideas about how to do that without any promises of what those possibilities may produce."

Kerry also welcomed the release in the eastern Ukrainian town of Slovyansk of inspectors from the Organisation for Security and Cooperation in Europe (OSCE) by pro-Russian separatists who alleged the team was spying for NATO.

The seven European military observers and five Ukrainian assistants had been held for more than a week. The observers came from Germany, the Czech Republic, Denmark, Poland and Sweden.

The men, who were to arrive in Germany late Saturday, said the recent fighting going on around Slovyansk had been deeply unsettling.Their leader, German Colonel Axel Schneider, told a small group of journalists just after leaving the town: "It is happiness, a deep relief" to be free.

Russia, which denies fomenting the unrest in eastern Ukraine, sent its former human rights ombudsman to negotiate for the release of the observers as a representative of Russian President Vladimir Putin.

"It's a step. But there are many other steps that have to be taken in order to be able to de-escalate the situation," Kerry told reporters after landing in the Democratic Republic of Congo, the latest stage in his current visit to Africa.

Also on Saturday, Lavrov spoke on the telephone with chairman of the OSCE, Didier Burkhalter, who is also the current Swiss president, about the situation in Ukraine.

The Russian foreign ministry said in a statement afterwards they "confirmed the need for complete fulfillment of Geneva declaration," an international deal aimed at ending the crisis.

Lavrov also said that it was important that the mediating role of the OSCE was increased to secure Kyiv's fulfillment of the declaration.

"Chances of this still exist," the Moscow statement said, as long as all Ukrainian regions are represented in a national dialogue on constitutional reform, and "terrorists" from Ukraine's far-right political party, Right Sector, are curbed.

Kerry also condemned the violence in the Black Sea port of Odessa, where at least 42 people died in skirmishes Friday between Ukrainian government supporters and opponents.

"All of this violence is absolutely unacceptable and Russia, the United States, Ukrainians, Europeans, the OSCE - all of us bear responsibility to do everything in our power to reduce the capacity of militants and extremists who are armed to be carrying out these terrorist and violent activities," Kerry said.

"They must end, and everybody with any influence on any party has an obligation to try to bring an end to this violence."

Acting president Oleksandr Turchynov declared two days of mourning over the loss of lives across the country.