Workers took down the statue of Confederate General Robert E. Lee in Richmond. Last week, the Virginia state supreme court paved the way for its removal. 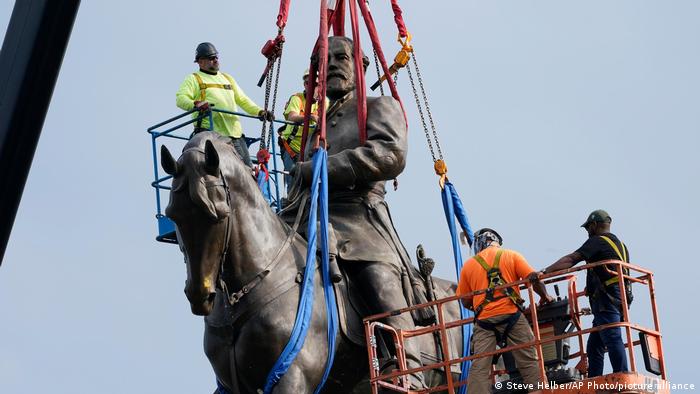 As the statue of Robert E. Lee came down, a crowd of hundreds cheered and chanted, "Whose streets? Our streets!" and "Hey, hey, hey, goodbye!"

A team of workers in Richmond in the US state of Virginia removed the city's 21-foot (6-meter) statue of Confederate General Robert E. Lee on Wednesday.

Erected in 1890, Richmond's Lee statue was one of the largest monuments to the Confederacy. The Confederacy was a breakaway group of southern states that supported slavery in the 1861–1865 Civil War against the Union, northern states loyal to the federal government that opposed the practice.

Such monuments are widely seen in the US as outdated symbols of racism and oppression.

Hoisted away to cheers

Hundreds gathered on Monument Avenue to watch as construction workers strapped harnesses around Lee and the horse on which he was mounted.

One worker in an orange vest counted down, and — amid cheers from the crowd — the equestrian statue of Lee was hoisted off the plinth.

State, capital, and city police officers had cordoned off streets for blocks around the traffic circle where it stood.

After the bronze figure's removal, a work crew started cutting it into at least two pieces for storage at an undisclosed facility. The plinth is expected to remain, but workers are due to remove decorative plaques and extricate a time capsule from underneath the site.

The capsule, buried at the time the monument was erected, is to be replaced with a new one.

The statue had stood alongside three other Confederate monuments which came down last summer in the wake of the killing of George Floyd.

The 46-year-old Black man died as Minneapolis police officer Derek Chauvin put a knee on his neck for more than eight minutes.

Virginia Governor Ralph Northam had ordered the statue's removal last summer following the death of George Floyd, but a Virginia state law protected monuments to war veterans. The law changed last year with a newly-elected Democratic majority in the statehouse but the removal order was delayed in court.

In June 2020, Northam had said, "We put things on pedestals when we want people to look up,'' adding, "Think about the message that this sends to people coming from around the world to visit the capital city of one of the largest states in our country."

Last week, the Virginia state supreme court ruled that the statue could be removed.

On Wednesday, with the statue coming down, Northam said it represented, "more than 400 years of history that we should not be proud of."

The statue itself had transformed since the killing of George Floyd into a hub for protests and the granite base on which the equestrian statue stood covered in anti-police and anti-racism graffiti. 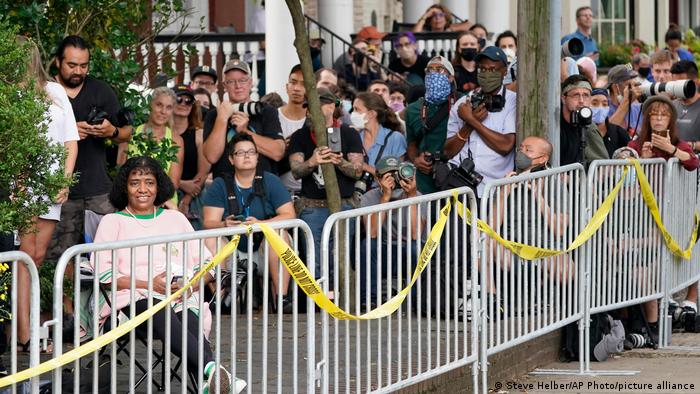 On Monument Avenue in Richmond, the statue of Robert E. Lee was the last remaining Confederate statue after three others came down last summer

Gary Flowers, a Black radio show host and activist, told The New York Times as he watched the statue come down, "As a native of Richmond, I want to say that the head of the snake has been removed."

He said he planned to celebrate Wednesday night surrounded by pictures of his late ancestors with thoughts in his head and heart about how justice had been done for their "humiliation and agony and pain."

Irv Cantor, 68, a white man who described himself as a moderate Democrat with a home on Monument Avenue told the paper, "I've evolved."

"I was naïvely thinking that we could keep these statues and just add new ones to show the true history, and everything would be fine," Cantor said, adding, "Now I understand the resentment that folks have toward these monuments, I don't think they can exist anymore."

US: Biden meets with George Floyd's family on anniversary of murder

The family has called on the White House and lawmakers to pass police reform legislation.

US: Confederate statues removed in Charlottesville