Statues of Civil War generals Robert E. Lee and Thomas "Stonewall" Jackson were removed Saturday morning, capping years of legal wrangling over the legacy of the Confederacy and the institution of slavery. 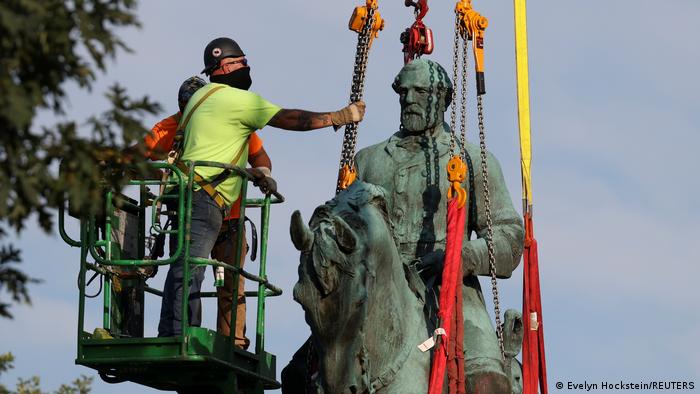 Though some still see General Lee as a hero of the Confederacy, most see him as a reminder of bloody racial oppression

Speaking to reporters in front of a statue of General Robert E. Lee on Saturday, Charlottesville Mayor Nikuyah Walker said, "Taking down this statue is one small step closer to the goal of helping Charlottesville, Virginia, and America, grapple with the sin of being willing to destroy Black people for economic gain."

A statue of General Thomas "Stonewall" Jackson was also removed. Officials, who announced the planned removal on Friday, said both sculptures would be kept in a storage facility until the city council made a final decision on what to do with them.

The removal of the Lee sculpture, commissioned in 1917 and dedicated in 1924, sparked intense fighting among citizens in the city and across the country. The most recent calls for the sculpture to be taken down began in 2016, when a young high school student named Zyahna Bryant started a petition seeking its removal.

Her petition was immediately met with legal challenges at a time when the US was beginning to openly grapple with the legacy of hundreds of monuments to Confederate leaders across the south.

Those calling for their removal decried them as symbols of racial hatred, and a constant reminder of the oppression of Blacks, pointing out that they had been erected long after the end of the Civil War — fought to uphold the institution of slavery — by groups espousing white supremacist ideals and the so-called "Lost Cause" myth that seeks to glorify the Confederate cause as heroic and noble.

Those opposed to their removal argued that it was an attempt to erase history.

As calls for the Lee statue's removal gained traction, white supremacists descended on the small college town for what was billed as the "Unite the Right" rally on August 11 and 12, 2017.

Right-wing extremists from across the country were seen marching to the statue by torchlight on the evening of the 11th, chanting racist and antisemitic slogans. On August 12, they clashed with counter protesters.

Those clashes ultimately resulted in the death of 32-year-old Heather Heyer, who was killed when an Ohio man drove his car into a crowd of counter protesters— killing Heyer and seriously injuring dozens more.

At the time, US President Donald Trump, who voiced opposition to the removal of such monuments, famously defended right-wing protesters, claiming "you had some very bad people in that group, but you also had people that were very fine people, on both sides" of the protest.

US: Confederate statues removed in Charlottesville