US group threatens to use stolen Confederate statue as 'a toilet'

Unless their demands are met, the "anti-racist" group pledged to defile the century-old Jefferson Davis Memorial Chair taken from a cemetery in Selma, Alabama. 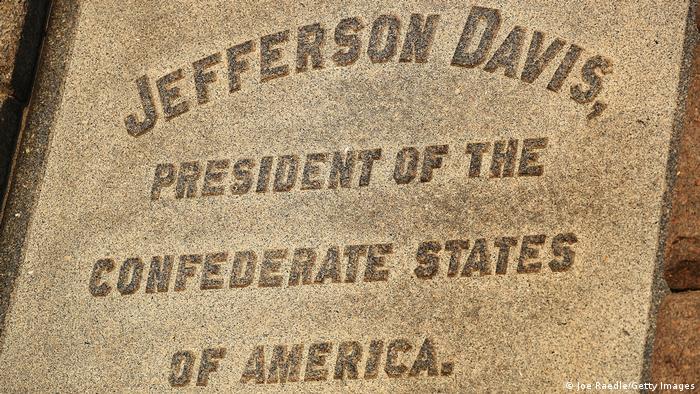 Following the disappearance of a Confederate monument from an Alabama cemetery last month, a group is claiming responsibility for the theft and threatening to turn the sculpture into a toilet.

On March 20, the United Daughters of the Confederacy, a hereditary group devoted to preserving the memory of the bloc of the US states which lost the American civil war, reported the Jefferson Davis Memorial Chair had gone missing from a Selma cemetery.

Jefferson Davis was the only president of the Confederacy which rebelled against the United States in 1861 and the administration helmed by Abraham Lincoln. Patricia Godwin, a member of the Selma chapter of the UDC, said the chair was donated more than a century ago and sat along with other Confederate monuments in a large section of the town's Old Live Oak Cemetery.

There is a $5,000 reward leading to information about the disappearance of the chair, described as being about 3 feet tall and weighing several hundred pounds, according to the Montgomery Advertiser.

"They need to return the chair. It's grand theft,'' Godwin told AP.

What does the group want?

Jackson said an email signed "White Lies Matter'' was sent to media outlets Monday claiming to be from the person, or people, who took the chair.

The group, which calls itself an "anti-racist action", did not ask for money.

Instead, as reported by the USA Today newspaper, they demanded that the United Daughters of the Confederacy (UDC) hang a banner outside their headquarters in Richmond, Virginia.

The banner would display a quote from Black Liberation Army activist Assata Shakur: "The rulers of this country have always considered their property more important than our lives.''

"White Lies Matter" said it had already delivered the banner to the UDC.

They demand that it be displayed for 24 hours beginning on Friday April 9, the 156th anniversary of the surrender Confederate army forces.

"Failure to do so will result in the monument, an ornate stone chair, immediately being turned into a toilet," the group is quoted in the Alabama Media Group as saying.

In exchange, the White Lies Matter group promises to return the statue "and clean it to boot.

World Stories - Confederate Statue Struggle in the US

World Stories - Confederate Statue Struggle in the US

"Jefferson Davis doesn't need it anymore. He's long dead. ...Like most Confederate monuments, it mostly exists to remind those who's freedom had to be purchased in blood, that there still exists a portion of our country that is more than willing to continue to spill blood to avoid paying that debt down,'' the note said.

Why was the chair stolen?

In an emailed response to questions from the AP news agency, the White Lies group said their aim is "to creatively address the argument surrounding Confederate monuments and hope that the UDC chooses to play ball.''

"Many in this country seem more concerned with violence against things than violence against people, as long as they can continue to convince themselves those people are just things,'' the reply said.

According to the police report, the group claims it is worth $500,000.

"America's original sin is that people were kidnapped from their homes and forced to build one of the most prosperous nations in the world, without being allowed to participate in it," a note from the group published in the USA Today said.

"We decided, in the spirit of such ignominious traditions, to kidnap a chair instead."

Why is Selma important to race relations in the US?

In 1965, it was the scene of a series of bloody voting rights marches where state police violently beat protesters, including future congressman, John Lewis, as they attempted to make their way to the Alabama state capitol of Montgomery.