US President Trump has been urged to condemn the actions of white supremacists which led to the deaths of three people in Charlottesville. The Virginia state governor called on Trump to "come out stronger."

The White House on Sunday said Trump's comments on the violence of Charlottesville "of course" covered white nationalist groups and the KKK.

After Trump received widespread criticism for his lackluster response to the violence in Virgina, his office sent out a statement to reporters to clarify his comments.

"The president said very strongly in his statement yesterday that he condemns all forms of violence, bigotry, and hatred, and of course that includes white supremacists, KKK, neo-Nazi, and all extremist groups. He called for national unity and bringing all Americans together," the statement said.

Speaking from Colombia where he is on a Latin American tour, Pence defended Trump's comments and condemned the violence in the "strongest possible" terms.

"We have no tolerance for hate and violence from white supremacists, neo-Nazis or the KKK. These dangerous fringe groups have no place in American public life and ... and we condemn them in the strongest possible terms," Pence said from Colombia.

"The president also made clear that behavior by others of different militant perspectives are also unacceptable in our political debate and discourse.

"Our administration is bringing the full resources of the Department of Justice to investigate and prosecute those responsible for the violence that ensued yesterday and we will hold them to account under the law."

Pence attacked media outlets for focusing on Trump's comments rather than the violent incidents themselves.

"I take issue with many in the national media who spent more time criticizing the president's words than those who perpetrated the violence. We should be putting attention where it belongs and that is on these extremists groups."

US President Donald Trump said he was closely monitoring the events from his golf resort in Bedminster, New Jersey, where he was on a working holiday.

Trump spoke to reporters saying he condemned the "egregious display of hatred, bigotry and violence, on many sides. On many sides."

"We have so many incredible things happening in our country," he said. "So when I watch Charlottesville, to me it's very, very sad."

One woman had been killed in Charlottesville on Saturday when a car rammed into a group of protesters who were protesting the presence of white supremacists who had gathered in the city for a rally. A man, who was photographed earlier in the day holding a shield with the emblem of a white supremacist group, has been arrested on murder charges.

Virginia State Police said on Sunday that an investigation was being carried out into a fatal helicopter crash that claimed the lives of two state troopers. The helicopter crashed on Saturday afternoon in a wooded area while assisting in law enforcement activities related to the clash between white nationalists and counter-protesters in Charlottesville.

'No place for racism'

President Trump also said that people should unite, bearing in mind that they "are all Americans first." However, he  ignored questions from a journalist about how he felt about his widespread support from white nationalist groups.

Later, as if to make up for her father's lackluster response, Ivanka Trump wrote on Twitter that "there should be no place in [US] society for racism, white supremacy and neo-Nazis."

Charlottesville Mayor Michael Signer was not impressed with the Trump response, however, and even laid part of the blame for the violence at the feet of the president - citing his anti-minority rhetoric while on the campaign trail.

"Look at the campaign he ran," Signer told broadcaster CNN.

"Look at the intentional courting both, on the one hand, of all these white supremacists, white nationalist groups like that, anti-Semitic groups. And then look on the other hand, the repeated failure to step up, condemn, denounce, silence, you know, put to bed all those different efforts."

Trump's blaming of "many sides" drew swift rebuke from Republicans and Democrats alike.

Democrat House of Representatives member Adam Schiff said Trump "needs to speak out against the poisonous resurgence of white supremacy. There are not 'many sides' here, just right and wrong."

Republican member Cory Gardner meanwhile tweeted that President Trump should "call evil by its name. These were white supremacists and this was domestic terrorism."

"I have a message to all the white supremacists and the Nazis who came into Charlottesville today [Saturday]," he told reporters. "Please go home. And never come back. Take your hatred and take your bigotry. There is no place here for you." Earlier on Saturday McAuliffe declared a state of emergency "to aid state response to violence" at the Charlottesville rally.

"I want to urge my fellow Virginians, who may consider joining either in support or opposition to the planned rally, to make alternative plans," he said in his statement.

Together with the fatality, a further 19 people were injured when a car drove into a crowd of counter-protesters. Footage showed the car slowing down before accelerating towards the crowd, sending people flying and seemingly crushing one person between two other stationary cars. The silver sedan then reversed away rapidly.

The victim was later identified as 32-year-old Heather Heyer, who had come to protest the far-right gathering.

Police later arrested a 20-year-old man named James Fields Jr, who was allegedly the driver and harbored neo-Nazi sympathies. He was being charged with multiple offenses including second-degree murder.

Several hundred counter-demonstrators were marching through the university town for a second day in opposition to a crowd of some 6,000 people attending a right-wing rally when the car struck.

The FBI said Saturday that it had opened a civil rights investigation into the circumstances of the car driving into crowd.

"The Richmond FBI Field Office, the Civil Rights Division and the US Attorney's Office for the Western District of Virginia have opened a civil rights investigation into the circumstances of the deadly vehicular incident that occurred earlier Saturday morning," the FBI's Richmond Division said in a statement. "The FBI will collect all available facts and evidence." 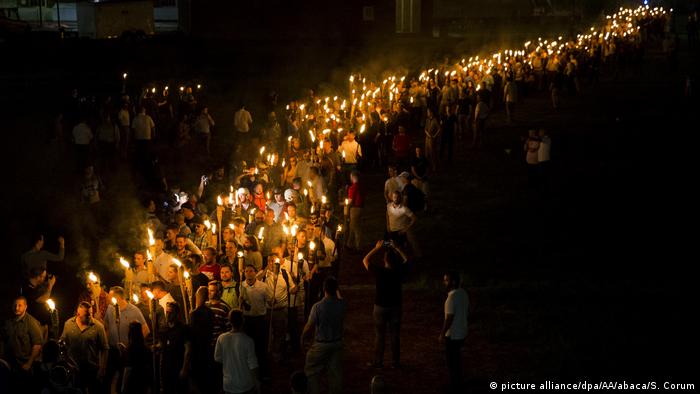 As many as 6,000 protesters, including supporters of the Ku Klux Klan (KKK), descended on the university town of Charlottesville on Saturday to protest the removal of a statue of Confederate General Robert E. Lee from a public park. Charlottesville lies about 160 kilometers (100 miles) outside of the US capital, Washington, DC.

Protesters oppose the removal of the statue of Lee, saying it is a benign symbol of southern heritage. But critics call it an overtly racist symbol of slavery.

Hundreds of white nationalists marched Friday night on the Charlottesville campus of the University of Virginia, carrying burning torches - a symbol associated with the KKK and its lynchings in the early to mid 20th century.

The Klan had officially endorsed Trump's presidential candidacy in 2016, and appear to have been emboldened by his administration's fierce crackdown on immigrants.

Racism in the south

Lee led the Confederate South during the Civil War in its bid to secede from the United States in order to, among other things, maintain slavery. He, and other figures related to the history of the Civil War, remain widely popular across much of the US south, as evidenced by statues and roads commemorating their war-time leaders. The Confederate flag is another such potent symbol that has faced a great deal of scrutiny in the past few years. 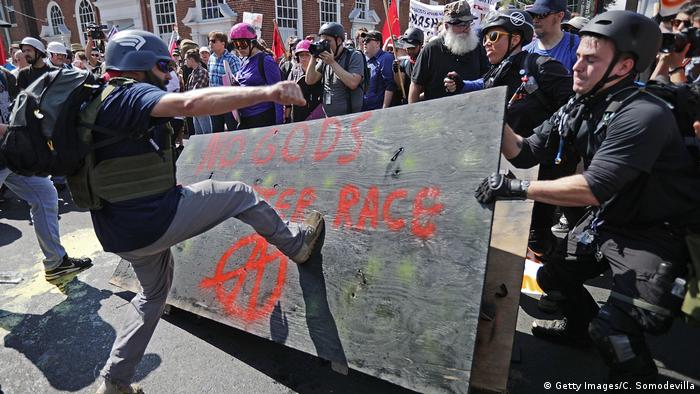 In addition to plans to remove the statue, officials have renamed Lee Park where the statue stands, to Emancipation Park, which those opposed to the changes, called "empty political correctness."

Rally organizer Jason Kessler described Robert E. Lee as a symbol of white people threatened by immigration and "ethnic cleansing." Mimi Arbeit, an organizer of the counter-protests, however, rejected Kessler's claim that the rally was about freedom of speech.

"Fascism functions ... by using the institutions of a democracy towards its own ends," she said.

Why this KKK member supported Trump

What was meant to be a protest against the removal of a statue of Civil War general Robert E. Lee has turned into violence. One person has died as clashes between white nationalists and left-wing groups turned ugly. (13.08.2017)