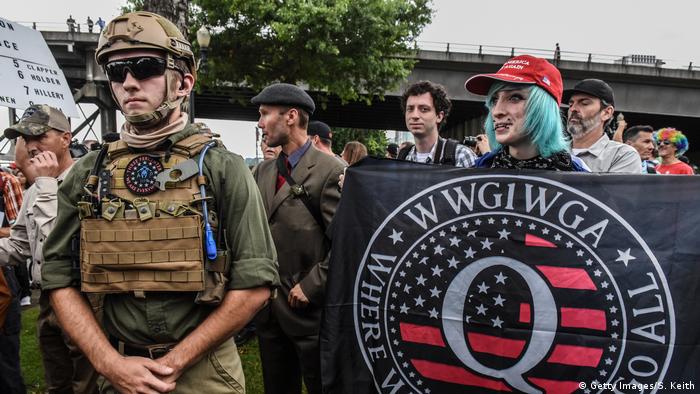 Several advocates of the QAnon conspiracy theory have been placed in custody for charges related to the breaching of the US Capitol, FBI Director Christopher Wray said at a Senate hearing on Wednesday.

"We have arrested at least five self-identified QAnon adherents related to the January 6 attacks specifically," Wray told the Senate Intelligence Committee. He said the FBI was planning to release a public report on domestic threats from QAnon soon.

Wray said he believed that the pandemic has made people more vulnerable to conspiracies such as QAnon. He added that social media platforms have become the "key amplifier to domestic extremism" in the United States.

According to the QAnon theory, former President Donald Trump is involved in a fight against a shadowy global cabal of pedophiles who run a child sex trafficking ring. The theory claims that Democratic politicians, Hollywood actors and other figures are involved with the cabal, and that a "deep state" in the federal government is working against Trump's efforts to fight child trafficking.

Many QAnon proponents also believed the debunked idea that current President Joe Biden stole the 2020 election from Trump. QAnon supporters thought Trump would be inaugurated for a second term instead of Biden in January, with followers later mistakenly believing Trump would regain the presidency on March 4.

In addition to the United States, the QAnon theory has also gained traction in other countries, such as Germany and Japan.

What happened during the January 6 Capitol breach?

On January 6, a group of Trump supporters stormed the US Capitol building after the former president gave a speech in which he falsely claimed the November election was stolen by the Democrats. The supporters reached the inner areas of the Capitol, with the breach killing five people and leaving over 100 injured.