President Obama's trip to Thailand, Myanmar and the ASEAN summit in Cambodia is a sign of Washington's new Asia-Pacific policy. With regards to China, countries in the region now have to make some tough choices. 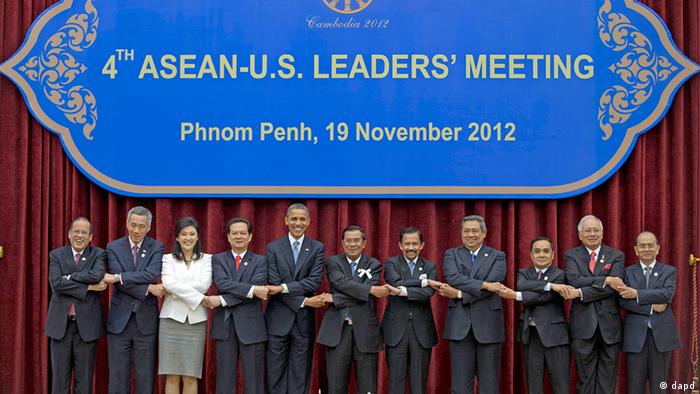 US President Barack Obama's first trip after re-election took him to Southeast Asia. Shortly before his trip, US National Security Advisor Thomas Donilon wrote in a comprehensive dossier on America's strategy for the Asia-Pacific region:

"The United States is a Pacific power whose interests are inextricably linked with Asia's economic, security and political order. America's success in the 21 st century is tied to to the success of Asia."

With those words, the security advisor confirmed what US Secretary of State Hillary Clinton and US Secretary of Defense Leon Panetta have said at a number of conferences in the past few years. 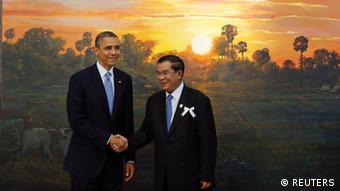 America's interest in Southeast Asia can be easily explained. The region wraps around the south of China and encompasses the South China Sea, which, with regards to strategic and economic interests, is one of the most significant regions of the world. It also geographically connects China and the regions second largest power India. The ASEAN states are home to over 600 million people and together make up Asia's third largest economy.

US interests compete with China's influence, which, due to its geographic proximity alone, has traditionally been large. The economic growth in nearly all Southeast Asian countries is tied to China's growth. Just how large China's influence is can be seen in the case of Cambodia. Last year China invested ten times more in Cambodia than the USA. China indirectly used the resulting economic dependency to prevent the creation of a closing joint communiqué at the 20th ASEAN summit - Cambodia refused to sign a joint declaration on the tension in the South China Sea.

Cambodia thus "very obviously proved to be China's mouthpiece," according to Gerhard Will, Southeast Asia expert at the German Institute for International and Security Affairs.

China shows discontent with the US offensive, but at the same time, is very self-confident. A commentary published by the Global Times, the Chinese Communist Party's international press organ, wrote Obama's trip to Myanmar, Cambodia and Thailand "seemingly has a menacing manner, but it cannot change the reality that Southeast Asia is economically tied to China." 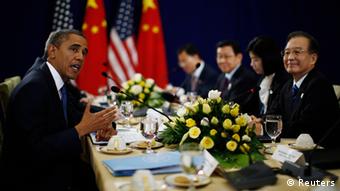 Leaders of two superpowers with similar interests meet in Cambodia

The rivalry between China and the US forces Southeast Asian countries, especially the politically and economically weaker ones, to take sides. Jost Pachaly, director of the Heinrich Böll Foundation's Asia office in Bangkok has observed the various reactions to Obama's visit and notes, "All of the ASEAN countries welcome the fact that the US is seeking to expand its influence in the region." Nonetheless, he said it was likely that they would do all they could to not get caught up in the middle of a power struggle between the two superpowers. They are forced to find a balance between their strategic and economic interests in the two.

"Smaller nations such as Thailand tiptoe on a thin rope, playing one big boy off another carefully, protecting Thai national interests - or the interests of whoever forms the ruling clique, to be more precise," commented Voranai Vanijaka of the Bangkok Post newspaper.

There are prominent differences in the individual strategies of the countries which have resulted from disparaties within ASEAN. What makes the situation so difficult for the ASEAN states is, according to Pachaly, "that development in the countries is so different." 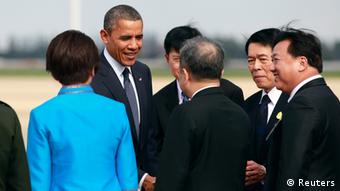 The Philippines, for example, are without a doubt, the US' closest ally in the region. In an open letter last week they criticized Cambodia - currently the ASEAN host - for once again blocking efforts to find an international solution to the territorial row in the South China Sea.

Pachaly said he was not surprised at Cambodia's actions, as it could not really afford a falling out with China, as it, along with Laos, "depend enormously on Chinese investment." He said it was a precarious situation for most countries in the region. Thailand is one country which has ties to both China and the US. Chinese Premier Wen Jiabao is expected to arrive in Bangkok just days after Obama's visit.

Myanmar has a unique standing in the US-Chinese tug-of-war. Pachaly said it was clear that the country was trying to distance itself from China and that Obama's visit was meant to reinforce those efforts; the once isolated pariah state aims at being accepted into the international community. But it is uncertain whether the US will be able to be an adequate counterweight to the decades of Chinese influence.

A major summit between Southeast nations is getting under way. The South China Sea dispute, which affects many countries participating, will require leaders to steer talks through extremely choppy waters. (17.11.2012)

Where the South China Sea dispute between China and members of the ASEAN power bloc is concerned, there appears to be no easy solution. But, a code of conduct might be the first step toward finding one. (15.11.2012)

Russia is Southeast Asia's leading arms supplier, but the region's governments are facing a dilemma amid the Ukraine war and an ever-growing list of alleged Moscow-inflicted atrocities.