The National Rifle Association held its annual meeting in the wake of the deadliest US school massacre in a decade. Speakers such as Donald Trump said gun restrictions would not stop the rise of mass shootings. 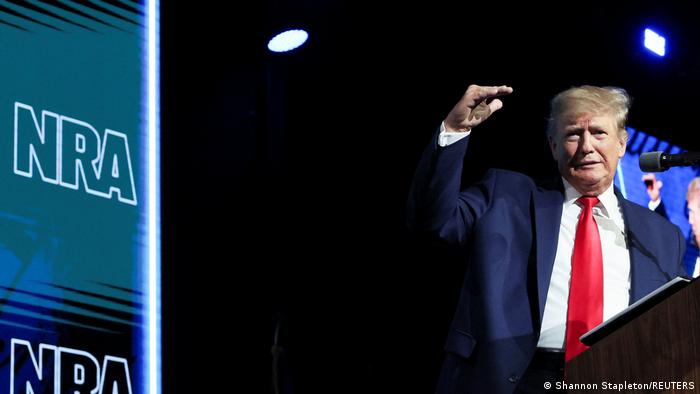 During the National Rifle Association's (NRA) annual convention in Houston on Friday, former US President Donald Trump said mass shootings are a reason to arm, not disarm Americans.

"The existence of evil in our world is not a reason to disarm law-abiding citizens," he said, just days after a school shooting in the Texan city of Uvalde renewed calls for gun control.

During the massacre on Tuesday, 19 children and two teachers were shot and killed in an elementary school. The former president read aloud their names during the convention.

He also said every school should have a single point of entry, strong fencing and metal detectors, adding there should also be a police official or an armed guard at all times in every school.

Gun lobby under pressure after the massacre

Outside the convention center, Becky Pringle, the president of the nation’s largest teachers union, rejected suggestions that teachers be armed to thwart future shootings.

"More guns equal more violence," she said outside the meeting. "Assault weapons should be banned."

Protesters gathered outside the event, demanding an end to the pro-gun lobby's stranglehold on US politics.

"Its bad optics, its probably also bad politics. It is incomprehensible," said DW correspondent in Texas Stefan Simons of the decision not to cancel the convention. "For those parents, and the people in Uvalde we talked to… a lot of people are having trouble understanding why the NRA thought it was still a good idea to go forward with this."

This would not be the first time the NRA displayed a lack of sensitivity to it's convention location. In 1999, they held their annual summit in Denver, Colorado, less than two weeks after the Columbine High School shooting in the same state.

Despite the optics, thousands of gun enthusiasts descended on the meeting, the first since 2019, filling a vast convention hall packed with booths of gun and gear manufacturers, walls of semi-automatic rifles and hunting products. 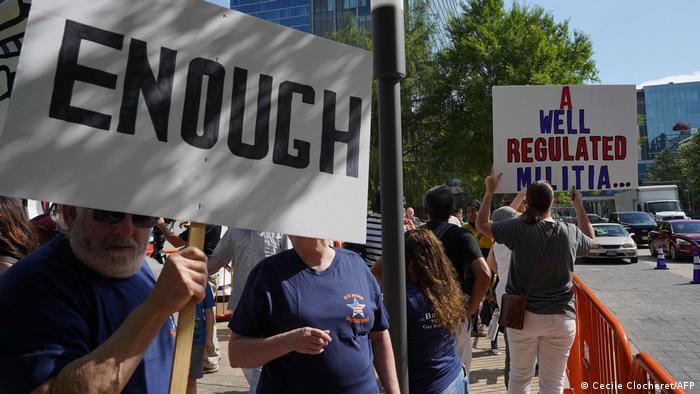 NRA Executive Vice President and CEO Wayne LaPierre also reflected on the calls for gun control in the wake of the mass shooting in Uvalde.

"Restricting the fundamental human right of law-abiding Americans to defend themselves is not the answer. It never has been," he told the receptive crowd.

Senator Ted Cruz said there have been too many mass shootings in Texas, "we must act decisively to stop them." He said, however, that restrictions on guns would not help, "what stops armed bad guys are armed good guys."

Attendees were banned from bringing "firearms, firearm accessories, knives, and other items," to the firearms convention, reportedly because of security concerns from the ex-president.

In a statement ahead of the meeting, the NRA said of the killing in Texas: "We recognize this was the act of a lone, deranged criminal. As we gather in Houston, we will reflect on these events...and pledge to redouble our commitment to making our schools secure."

Governor Greg Abbott, who has repeatedly brushed off calls for tougher gun laws, sent a pre-recorded video message. He had been scheduled to speak, but instead was traveling to the site of the massacre in the town of Uvalde.

Texas Lieutenant Governor Dan Patrick also canceled his appearance, saying that while he supported the NRA, he would not want to "bring any additional pain or grief to the families and all those suffering in Uvalde."

Texas Senator John Cornyn and Representative Dan Crenshaw bowed out as well, but did not mention the school shooting.

Another high profile guest who dropped out of the event was "American Pie" singer Don McLean, as well as several other country music singers. Daniel Defense, the company that manufactured the weapon used in the Uvalde massacre, also pulled out of the convention.

Although their website claims the organization has some 5 million members, prolonged in-fighting and internal scandals, as well as federal lawsuits, have seen both that number and the organization's revenue declining in recent years.

Uvalde in state of shock after school shooting