The killing of 19 children and two teachers in a school shooting in Uvalde has sparked a nationwide debate on gun control. President Biden said the constitutional right to own weapons "is not absolute," and never was. 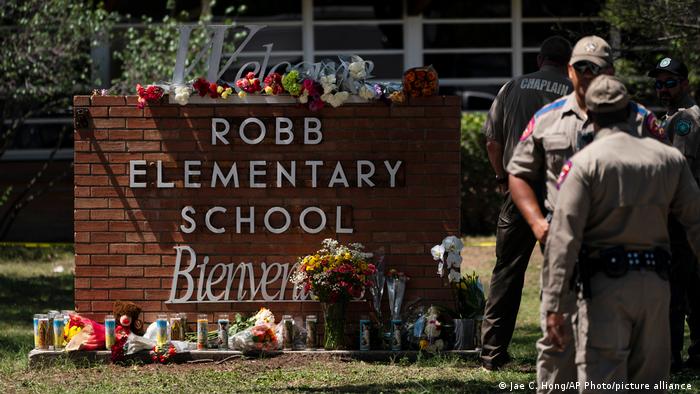 US President Joe Biden on Wednesday called again for new restrictions on gun purchases and ownership.

In reference to the constitutional amendment that entitles Americans the "right to bear arms," Biden said: "The Second Amendment is not absolute. When it was passed, You couldn't own a cannon. You couldn't own certain kinds of weapons. There's always been limitations.''

The law, part of the 1791 Bill of Rights, states, "A well regulated Militia, being necessary to the security of a free State, the right of the people to keep and bear Arms, shall not be infringed."

Biden was speaking a day after an attack on an elementary school in Uvalde, Texas, killed 21 people.

The deadliest school shooting to take place in the US in a decade reignited a debate about gun laws in the country.

It took place just days before the National Rifle Association (NRA), the powerful gun lobby in the US, was scheduled to hold its annual meeting in Houston, Texas.

Several prominent Texas Republicans, including Governor Greg Abbott and Senators Ted Cruz and John Cornyn, were scheduled to speak at the conference.

On Thursday, the Senate is to hold a procedural vote to debate legislation over fighting domestic terrorism that passed the Democratic-controlled House of Representatives after a mass shooting in Buffalo, New York, earlier in May.

He said the 18-year-old gunman had written in separate Facebook private messages 30 minutes before the rampage that he had "shot his grandmother," and was going to "shoot up an elementary school."

A Facebook spokesman said the posts "were private one-to-one text messages that were discovered after the terrible tragedy occurred."

At one point during Abbott's briefing, the Republican governor was heckled over his gun control stance by a rival Democrat.

Beto O'Rourke, who sought the Democratic presidential nomination in 2020 and is now challenging Abbott for his job in upcoming elections, shouted: "You are doing nothing, you are offering us nothing."

"You said this is not predictable. This is totally predictable," O'Rourke said. 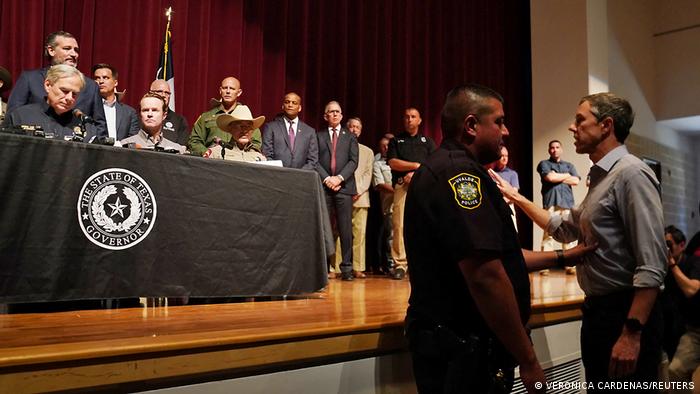 O'Rourke interrupted the news conference to confront Abbott for loosening, rather than restricting, the state's gun laws

A voice from the podium with Abbott yelled in response: "Sir, you are out of line" and referred to O'Rourke with an expletive.

O'Rourke responded as he was being shepherded out, turned around, and pointed his finger, saying: "This is on you until you choose to do something different."

"The ability of an 18-year-old to buy a long gun has been in place in the state of Texas for more than 60 years," he said, claiming that throughout those six decades, the state had "not had episodes like this."

"The one thing that has substantially changed is the status of mental health in our communities," he added.

The victims of Tuesday's shooting were 19 children and two teachers.

The school was holding a series of themed days as part of a countdown to the summer holidays. Tuesday's theme was to be "Footloose and Fancy," with students wearing nice outfits.

Among the victims was Amerie Jo Garza, who had just celebrated her 10th birthday earlier this month, according to her family.

Her father Angel Garza had no news of her for hours on Tuesday. "I don't ask for much or hardly even post on here but please it's been 7 hours and I still haven't heard anything on my love," he wrote on Facebook, along with a photo of him hugging his grinning daughter.

He posted again several hours later: "Thank you everyone for the prayers and help trying to find my baby," he said. "My little love is now flying high with the angels above."

What were the circumstances surrounding the shooting?

The gunman used an AR-15-style semi-automatic rifle and barricaded himself inside a classroom with the victims at Robb Elementary School before opening fire, authorities said on Wednesday.

Police circled the school, smashing windows in an effort to get children and staff to safety, Texas Department of Public Safety spokesperson Chris Olivarez told US broadcaster CNN.

Officers eventually breached the classroom, killing the gunman, who was shortly after identified as an 18-year-old Salvador Ramos.

Investigators have yet to shed any light on the motive for the attack, which also left 17 people wounded.

Governor Abbott said Ramos, a resident of the small town some 85 miles (135 kilometers) away from San Antonio, had no known criminal history or past mental health issues. But US media reports on Wednesday, citing people close to him, suggested some warning signs were known, if not to authorities.

World leaders have offered their condolences over the deadly rampage at a Texas school. Meanwhile, President Biden has called for tougher gun controls, asking why the US is "willing to live with the carnage?"