The January 6 riots at the US Capitol and the terror attacks of September 2001 were an "assault" on democracy, the House speaker says. She also claimed ex-President George W. Bush did not "accept" climate initiatives. 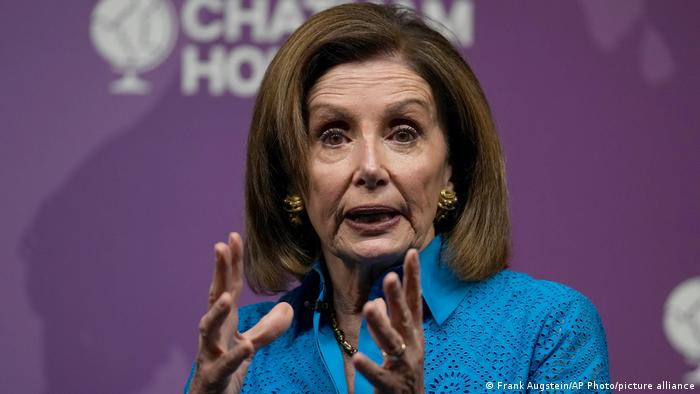 US House of Representatives Speaker Nancy Pelosi said Friday the riot at the Capitol earlier this year was an attack on democracy — just like 9/11.

She said both the terrorist attacks of 2001 and the January 6 insurrection were an "assault" on US democracy, just that one was from "the outside" and the other "from within."

"Horrible in both cases. What had happened to our democracy on 6 January was horrible," she said.

And Pelosi was adamant former President Donald Trump "galvanized" those involved in the Capitol riots that left five people dead.

It "was an assault on Congress, constitution and our democracy. How we deal with it is really the measure of the strength of our democracy."

She also questioned the motive of Republican senators' rejection of a congressional investigation into the Capitol attack. "Why do they reject finding the truth of what happened in January? Is it because they had some sympathy for the cause?"

Speaking to an audience at the Chatham House think-tank in London, Pelosi addressed a number of issues in addition to the attack on the Capitol, including climate change, trade, and peace in Northern Ireland in the wake of Brexit. But she began by talking about the current state of the Republican Party in the US.

Dramatic hearing into storming of US Capitol

Pelosi on... the Republican party

Populism in the US, Pelosi said, stemmed from a fear of globalization, automation and immigration, and manifested itself in Islamophobia, antisemitism and ideas of white supremacy.

These are fears Trump tapped into, but now it was time for the Republican party to take stock and reform, she said.

"I would say to my Republican friends — and I do have some — take back your party, the Republican party. The Grand Old Party has made tremendous contributions to our country founded by Lincoln. Don't let your party be hijacked by a cult — essentially, that is what is happening."

She admitted the Democrats "have a big fight on our hands whether it is in the states or nationally." She also admitted some of the alienation was caused by inequality.

Capitol siege: Chants of "Kill him with his own gun"

Pelosi also raised concerns over the effects of capitalism, though she stopped short of saying the US should move away entirely from the notion.

"In America, capitalism is our system, it is our economic system, but it has not served our economy as well as it should. So what we want to do is not depart from that, but to improve it."

Pelosi on... the climate

Pelosi was keen to address climate skeptics, both within politics and elsewhere.

"If you are in denial about climate change, if you don't believe the science and data and won't respond to the data, that is a problem," she said to the audience but with a keen eye on those in Congress.

And former President George W. Bush did not escape criticism over his environmental legacy.

"He (George W. Bush) was not a climate accepter. He just wasn't, and his party was not. When it came to global meetings, and the rest, G7, well then it was G8, he never was a supporter of any climate initiatives."

Pelosi on... peace in Northern Ireland

The day after meeting UK Prime Minister Boris Johnson in London, Pelosi warned that there will be no transatlantic trade deal unless the British government solves post-Brexit differences with the European Union that risk destabilizing peace in Northern Ireland.

Britain and the EU are at loggerheads over trade arrangements that have imposed checks on goods coming to Northern Ireland from the rest of the UK. They were agreed upon by both parties in their divorce deal.

But now Britain says the new checks are onerous and wants to rewrite the accord. The EU, though, is unwilling to renegotiate.

The United States, which played a key role in securing Northern Ireland's 1998 Good Friday peace accord, has warned Britain against potentially undermining peace in the region.

"If there is destruction of the Good Friday accords we're very unlikely to have a UK-US bilateral [trade deal]," she said, before adding,"this is not a threat, it's a prediction."

The legislation is backed by President Joe Biden. It comes amid a rise in attacks, including murders, against Asian Americans during the COVID pandemic.

Comparisons making the rounds of the rioting in front of Capitol Hill with the Arab world uprisings have gone viral on media outlets. That's not just stupid, but offensive, says Aya Ibrahim.