The US has ended a military operation to support Libya's fledgling government in its efforts to retake the former IS stronghold of Sirte. The militant group still retains a presence in the country. 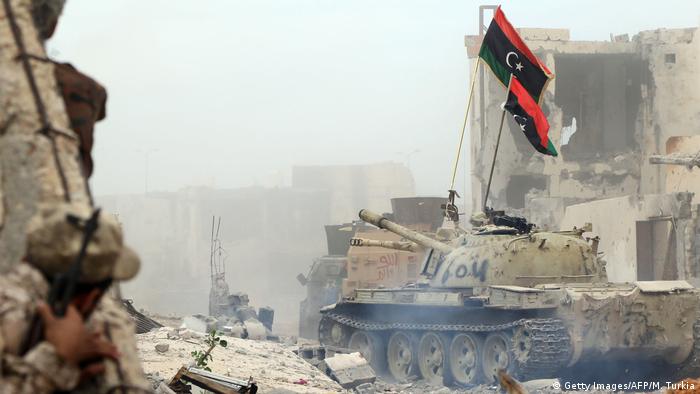 The US military has formally ended operations to drive the so-called "Islamic State" (IS) from its former stronghold in Libya, US military's Africa Command said in a statement on Tuesday.

The United States on August 1 launched Operation Odyssey Lightning to help government-aligned forces push IS from Sirte. Fayez al-Sarraj, the leader of the Libyan Government of National Accord (GNA), announced over the weekend that military operations begun in June in the coastal city had been completed after tough fighting to root out the jihadists.

"In partnership with the Libyan Government of National Accord, the operation succeeded in its core objective of enabling GNA-aligned forces to drive Daesh (IS) out of Sirte," Africa Command said.

The loss of Sirte is a major blow to the extremist organization, but it still retains a presence in the war-torn country. The extremist group has also been dealt a number of setbacks in Syria and Iraq.

The US military said it would continue to support the internationally recognized Libyan government to help "counter the evolving threat" posed by IS.

Libya descended into chaos following a 2011 NATO-backed military operation to oust longtime strongman Moammar Gadhafi, dividing into two rival administrations in the east and west. Rival factions and militias have been vying for influence and resources in the oil-rich North African country.

Libyan forces have recaptured all of the coastal city of Sirte from the so-called "Islamic State," a spokesman says. If confirmed, the retaking of the city represents a major blow to the terror organization. (05.12.2016)

Rival factions deployed tanks and heavy weaponry on the streets of Tripoli as the Libyan capital was rocked by the worst outbreak of violence in two years. The exact reason for the fighting was not immediately clear. (02.12.2016)