US Midwest hit by winter storm after chaotic weekend weather

Parts of the US Midwest are now having to cope with snow, ice and heavy rain after a weekend of tornadoes and floods. 43 people have died across seven states in the last few days. 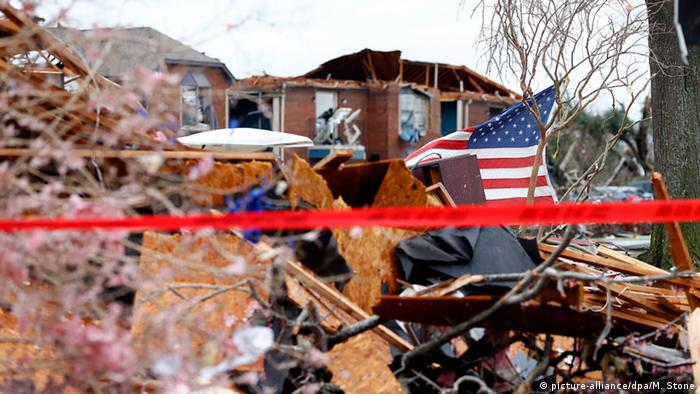 The National Weather Service said more than 20 states were being closely monitored for weather changes. Severe weather approaching the Midwest and Great Lakes region included snow, ice and heavy rainfall. A winter storm warning was also sent out for Iowa, Wisconsin and parts of other nearby states.

A day earlier, 13 people were killed in Illinois and Missouri after heavy rains triggered flash floods. Missouri Governor Jay Nixon declared a state of emergency in the area:

In Dallas, Texas, 11 people were killed by tornadoes on Saturday. Several residential areas around Dallas were turned to rubble, while four districts were declared disaster areas. Seventeen people died on Christmas Day in Mississippi, Tennessee and Arkansas and two other deaths were reported from Alabama.

Snowfall over the weekend, brought by a cold front from Alaska, also prompted an emergency in New Mexico, with snowdrifts as high as two meters. The weekend snowfall also covered 32 towns in Chihuahua, Mexico, which borders the US state.

"It's the most intense snowfall in the last 55 years," Efren Matamoros, the civil protection director of Ciudad Juarez told AFP news agency. The city's airport reopened on Monday after an emergency break over the weekend.

Dozens die in extreme weather conditions in US