US journalist recovers from Ebola in Nebraska hospital

US photojournalist Ashoka Mukpo has been pronounced free of Ebola at a hospital in Nebraska where he was admitted three weeks ago. The 33-year-old caught the deadly virus while on assignment in Monrovia, Liberia. 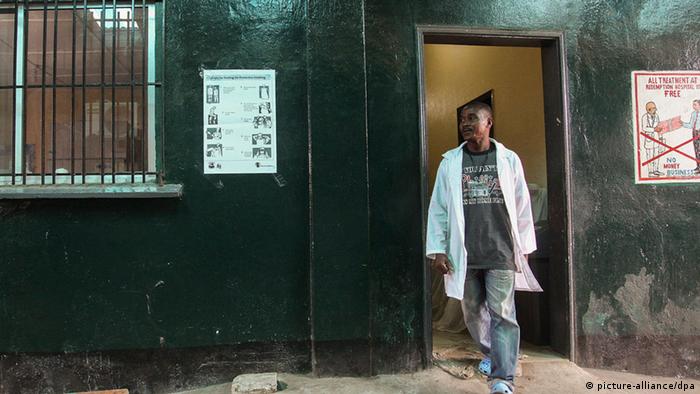 US photojournalist Ashoka Mukpo has been pronounced free of Ebola at a hospital in Nebraska where he was admitted three weeks ago. The 33-year-old caught the deadly virus while on assignment in Monrovia, Liberia.

Nebraska Medical Center announced that a recent test showed Ashoka Mukpo's blood is negative for the virus, a result that was confirmed by the federal Centers for Disease Control and Prevention.

Mukpo will be allowed to leave the hospital's biocontainment unit Wednesday (22.10.2014).

"We've learned first-hand that caring for a patient with the Ebola virus presents challenges you don't face in the regular hospital environment," said Dr. Phil Smith, medical director of the biocontainment unit at the Nebraska Medical Center. "But our years of training on protocol in the unit and gaining familiarity with all the personal protective equipment was certainly an advantage for us."

The 33-year-old Mukpo, of Providence, Rhode Island, contracted the virus while working as a freelance cameraman for NBC and other media outlets in Liberia. He has been at the Nebraska hospital since October 6 and was the second Ebola patient to be treated there.

"Recovering from Ebola is a truly humbling feeling," Mukpo said in a statement. "Too many are not as fortunate and lucky as I've been. I'm very happy to be alive."

Altogether, eight people have or are being treated for Ebola in the United States, one of whom, Liberia national Thomas Eric Duncan, has died.

Duncan's family members were among those released from quarantine in Texas on Monday, after passing a 21-day incubation period without showing signs of the virus.

Health care officials said that 43 of the 48 people on the original Ebola watch list in the US were no longer at risk. Duncan's fiancée and her son, Duncan's nephew, and a family friend were among those cleared for release. Duncan, a dual Liberian-US national, died of the virus on October 8 at Texas Health Presbyterian Hospital.

In recent months the price of oil has fallen massively. That has hit Russia, Iran and Venezuela particularly hard. Conspiracy theories abound as to the source of the current supply gut. (21.10.2014)

The World Health Organization is to hold an emergency meeting as the global community ratchets up its response to Ebola. Liberians have told DW the help was commendable, despite delays. (21.10.2014)

More than 40 people in the US have been released from quarantine after showing no signs of Ebola. Authorities and experts are cautiously optimistic that the virus is being contained. (21.10.2014)