Jackson is the first Black woman to be nominated to the nation's highest court. She faces a tough confirmation battle in the Senate, which is evenly divided between Democrats and Republicans. 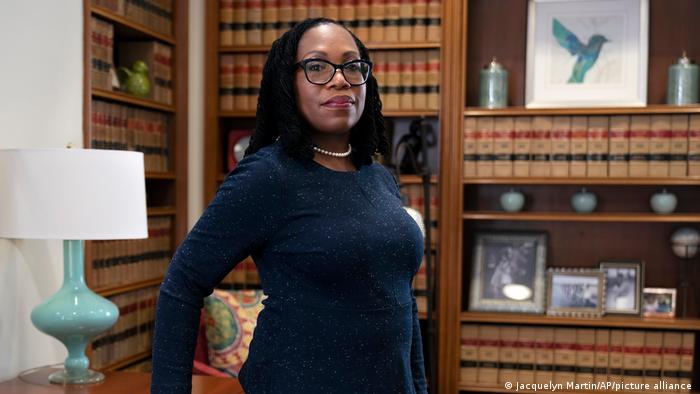 Jackson is the first Black woman to be nominated to the nation's highest court. She would replace liberal judge Stephen Breyer, who announced his retirement last month.

"I'm proud to announce that I am nominating Judge Ketanji Brown Jackson to serve on the Supreme Court," Biden said. "She is one of the nation's brightest legal minds and will be an exceptional Justice."

During an appearance with Jackson later on Friday, he described her as a "proven consensus-builder." He said Jackson was "uniquely accomplished" and a "distinguished jurist."

"For too long our government, our courts, haven't looked like America," Biden said. "I believe it's time that we have a court that reflects the full talents and greatness of our nation."

"As it happens, I share a birthday with the first Black woman ever to be appointed as a federal judge, the Honorable Constance Baker Motley," Jackson said in her nomination speech. "We were born exactly 49 years to the day apart. Today I proudly stand on Judge Motley's shoulders, sharing not only her birthday, but also her steadfast and courageous commitment to equal justice under law."

The 51-year-old currently serves as a judge on the US Court of Appeals for the US capital Washington, D.C. She attended Harvard Law School.

Jackson faces a tough confirmation battle in the Senate, which is evenly divided between Democrats and Republicans. At least 50 of 100 US senators would need to be in favor of her confirmation, with US Vice President Kamala Harris serving as the tie-breaking vote.

If confirmed, she would join two other liberal justices on the court, which has a 6-3 conservative majority. The court is currently deliberating hot button issues such as abortion and voting rights.

A relatively painless confirmation process might prove a boon for the Biden administration, as it struggles with both domestic and international challenges such as inflation and the Russian invasion of Ukraine.