US President Joe Biden once more rejected his predecessor Donald Trump's claims of executive privilege. In a letter to the National Archives, the White House said the disclosure was in the best interest of the nation. 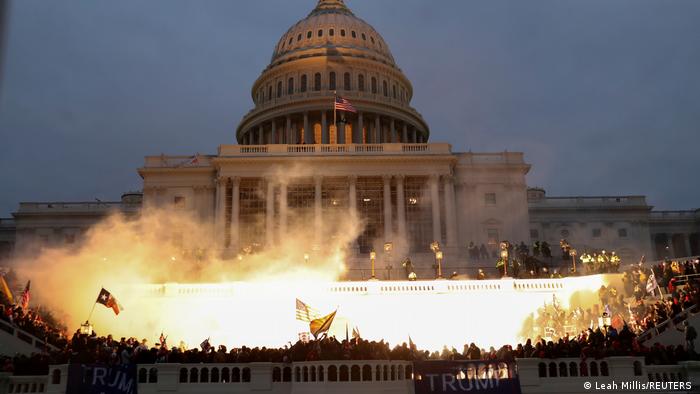 A congressional committee tasked with investigating the January 6, 2021 Capitol riot had requested White House visittor logs from that day

US President Joe Biden on Wednesday ordered the release of his predecessor Donald Trump's White House visitor logs from January 6, 2021 as requested by the congressional committee investigating the assault on the US Capitol building that day.

In a letter to the National Archives, White House counsel Dana Remus said Biden had considered Trump's claim of executive privilege but ultimately decided against keeping the visitor logs private, since doing so was "not in the best interest of the United States."

Remus said that Biden "voluntarily discloses such visitor logs on a monthly basis," as had the Obama administration. She added that Trump's claims of executive privilege would have covered visitor logs the Biden administration would ordinarily make public.

What is the January 6 committee investigating?

The January 6 committee is seeking as much information as possible to contextualize the US Capitol riot that sought to halt the peaceful transfer of power in the US by disrupting the certification of the vote that would formalize Biden's victory.

The committee is also interested in the financing and organization of the rally that Trump and his family attended on the Ellipse that day where he told his supporters to "fight like hell."

Congressional investigators are working to determine how much coordination took place between the rally's organizers and financiers, and the Trump White House.

The logs the January 6 committee has already received from that day do not contain information regarding ingoing or outgoing calls Trump made that day.

Ethics lawyer: Special prosecutor should investigate 'everyone in Trump administration'

The absence of this information presents a unique challenge to investigators working to establish a timeline of events of that day.

What does the National Archives seek from the White House?

The Presidential Records Act requires that the records of the sitting president and White House staff be preserved in the National Archives.

The responsibility for ensuring the National Archives receives material of historical importance falls on the outgoing administration.

Trump has tried and failed to withhold archival material, with the Supreme Court ruling against him in those efforts.

Biden has said he will not invoke executive privilege as it concerns the January 6 Committee's investigation into the events of that day unless required to do so.

Trump has teased a 2024 run for the presidency, though he has not officially announced yet. He continues to deny the outcome of the 2020 election, alleging without any factual basis or real evidence that it was stolen from him.