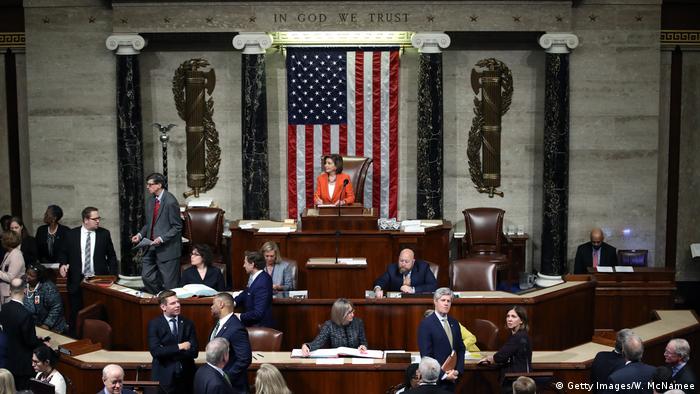 A divided US House of Representatives on Thursday voted on rules to formally start an impeachment inquiry of President Donald Trump.

The resolution passed 232-196, with all Republicans voting against and two Democrats joining them.

The resolution establishes the ground rules for a public impeachment inquiry and was not a vote on whether or not to impeach the president. It revealed that the Democrats have enough support to transition from closed-door interviews with witnesses to public hearings that may well extend into the 2020 election campaign and a formal vote to impeach the president.

The investigation is focused on whether Trump pressured Ukraine to investigate his Democratic political rival Joe Biden, and his son Hunter, by withholding military aid and a White House meeting with the country's new president, Volodymr Zelenskiy.

Biden, a former vice president, is the lead candidate in the Democratic presidential nomination to face Trump in the November 2020 election.

"What is at stake in all this is nothing less than our democracy," House Speaker Nancy Pelosi said before the vote. "It's a sad day. No one comes to Congress to impeach a president."

Republicans have mostly stood by Trump, calling the Democrat-led probe a partisan effort against a presidency they have opposed since the 2016 election.

"The president has done nothing wrong, and the Democrats know it," White House spokeswoman Stephanie Grisham said. She accused the Democrats of having an "unhinged obsession with this illegitimate impeachment proceeding" that hurts the American people.

Trump responded on Twitter with a now regular accusation: "The Greatest Witch Hunt in American History!"

What's in the resolution?

Trump's lawyers will only be able to mount a defense and cross-examine witnesses in the House Judiciary Committee if its chairman, Jerry Nadler, approves. The Judiciary Committee will be responsible for a second stage of hearings and drafting articles of impeachment, which would then go to a vote before the full House.

The Republican-controlled Senate would then hold a trial. A two-thirds majority in the Senate is required to convict the president, a prospect that is unlikely so long as Republicans continue to back Trump.

Republicans have criticized the procedures as biased against Trump. Democrats say that the constitution gives the House broad powers to pursue impeachment and they are following congressional rules used during the impeachment proceedings of Presidents Richard Nixon and Bill Clinton.

cw/rc (AP, dpa, Reuters)Every evening at 1830 UTC, DW's editors send out a selection of the day's hard news and quality feature journalism. You can sign up to receive it directly here.

A military officer has testified that he heard and reported Donald Trump's push for Ukraine to investigate presidential challenger Joe Biden. The House is now set to vote on the next steps in any impeachment proceedings. (30.10.2019)

The court ruling came in an order demanding that the Justice Department provide the House with blacked-out evidence from special counsel Robert Mueller's Russia investigation. (26.10.2019)