The controversial bill, which denounces all forms of hate, was prompted by remarks on Israel by Muslim-American congresswoman Ilhan Omar. Her comments caused a split between new and old members of the Democratic Party. 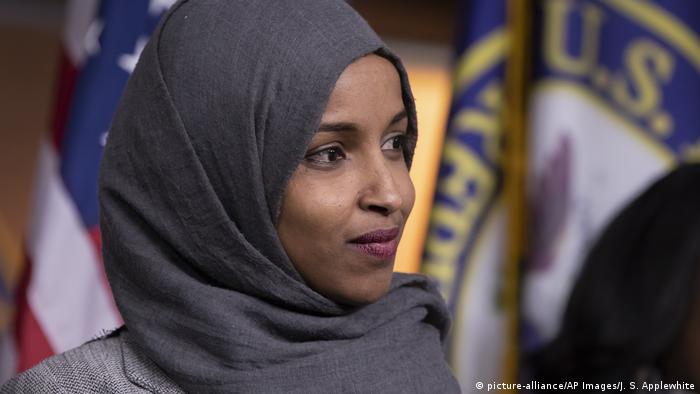 The US House of Representatives passed a resolution condemning anti-Semitism and other forms of hatred on Thursday, following a controversial debate over Democratic Congresswoman Ilhan Omar's remarks on Israel.

Though the resolution did not mention Omar by name, it was drafted in order to resolve the rift her remarks have caused within the Democratic Party and to quell an onslaught of criticism from Republicans, who went as far as to urge that Omar be removed from the House Foreign Affairs Committee.

Omar, who was elected in November to represent the state of Minnesota, said Israel's supporters were pushing US lawmakers to take a pledge of "allegiance" to a foreign country. The comment was viewed as signaling the historic anti-Semitic trope of dual allegiances.

A Muslim-American and the first woman to wear a veil in the US Congress, Omar has been critical of Israel and has supported Palestine. Last month, she apologized for comments that her critics said suggested Jewish Americans used money to influence pro-Israel US policies. Omar has said opposing the policies of Israel and Prime Minister Benjamin Netanyahu is not synonymous with anti-Semitism.

Pelosi: 'Not about policing speech'

Democratic House Speaker Nancy Pelosi said she did not believe Omar understood the "weight of her words" or the fact that her words would be perceived by some as anti-Semitic.

"It's not about her. It's about these forms of hatred," Pelosi said. Asked whether the resolution was intended to "police" lawmakers' words, Pelosi replied said that her party was "not policing the speech" of House members. "We are condemning anti-Semitism," Islamophobia and white supremacy, she said.

A vote on the resolution was delayed on Thursday, as other members sought to expand the scope to include all forms of discrimination. The seven-page bill condemned anti-Semitism, anti-Muslim discrimination and bigotry against minorities "as hateful expressions of intolerance."

Omar's comments caused a rift within the Democratic Party among generational lines, with younger and newer members backing the freshman congresswoman and older, more established Democrats condemning her remarks.

Democratic Representative Eliot Engel, who leads the Foreign Affairs Committee, said he welcomes policy debate on Israel, but condemned Omar's remarks, saying it was "deeply offensive to call into question the loyalty of fellow American citizens because of their political views, including the US-Israel relationship."

But the party's left flank came to Omar's defense. Senator Bernie Sanders, who is running for president in 2020, said that while anti-Semitism was a hateful and dangerous ideology that must be vigorously opposed, "we must not, however, equate anti-Semitism with legitimate criticism of the right-wing, Netanyahu government in Israel."

A statement from Senator Elizabeth Warren of Massachusetts cautioned that "branding criticism of Israel as automatically anti-Semitic has a chilling effect on our public discourse and makes it harder to achieve a peaceful solution between Israelis and Palestinians."

A US House resolution on anti-Semitism morphed into a broader statement against bigotry. But the entire process revealed divisions within the Democratic Party, writes DW's Amien Essif. (08.03.2019)

Pelosi says US needs NATO 'more than ever'

The US speaker of the house has stood strong against Donald Trump at home. As part of a cross-party delegation in Europe, she outlined a markedly different view of America's commitment to the trans-Atlantic alliance. (19.02.2019)