The US is toughening a policy denying funding to foreign NGOs that perform or promote abortions. Secretary of State Mike Pompeo said the US refused to "subsidize the killing of unborn babies." 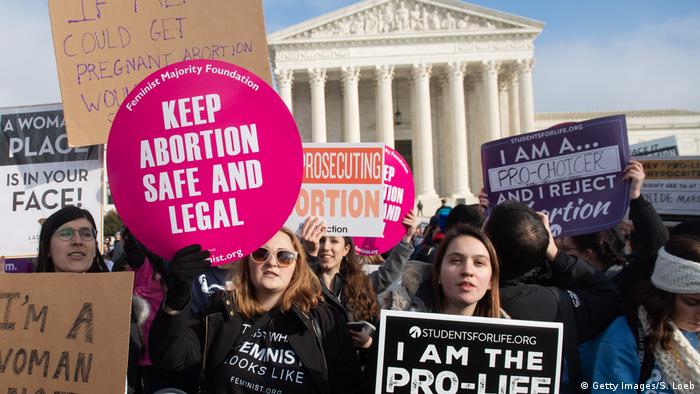 US Secretary of State Mike Pompeo on Tuesday announced that the US had expanded its restriction on foreign aid for non-governmental organizations that support abortions or work with groups that help women access the medical service.

"We can continue to meet our critical global health goals," Pompeo said. "While refusing to subsidize the killing of unborn babies." He announced new limitations on the use of federal government funds.

"We will refuse to provide assistance to foreign NGOs that give financial support to other foreign groups in the global abortion industry," Pompeo said.

Pompeo said that the new restrictions would "enforce a strict prohibition on backdoor funding schemes and end runs around our policy," adding that "American taxpayer dollars will not be used to underwrite abortions."

The Secretary also said the US would cut some assistance to the Organization of America States (OAS) for allegedly lobbying for abortion availability in the Western Hemisphere, but it was unclear how much this would be.

"The institutions of the OAS should be focused on the crises in Cuba, Nicaragua and in Venezuela and not advancing the pro-abortion cause," Pompeo said.

The changes are an expansion of the so-called "Mexico City policy," which was first established under President Ronald Reagan but was rescinded by subsequent Democrat administrations.

Just days after taking office in 2017, President Donald Trump reinstated the policy and expanded it to include not only reproductive health programs, but all health programs.

Critics of the policy call it the "global gag rule" and say it hurts reproductive and maternal health care in developing nations.

Pompeo denied that and said the US would continue to be a leader in such aid.

Critics have also said that not only does it limit what organizations can do with their own money, but it places restrictions on the types of conversations health care providers can have with patients.

Human Rights Watch warned last year that Trump was applying the rule not only to the tens of millions of dollars the US gives to family planning programs, but also to the more than $8 billion the US donates to global health issues.

US House of Representatives votes to ban late-term abortions

Lawmakers in the Republican-led House of Representatives have backed a bill to outlaw most abortions after 20 weeks of fetal development. President Donald Trump has promised to sign the bill should it pass the Senate. (04.10.2017)

Although abortion is broadly available across the European Union, observers point to endangerment of such access. A case in Malta highlights the risks. DW looks at four EU countries with diverging policies.