In an unprecedented move, Democrats have formally asked the IRS to release the past six years of Donald Trump's tax returns. The decision is likely to spark a legal battle that could take years to resolve. 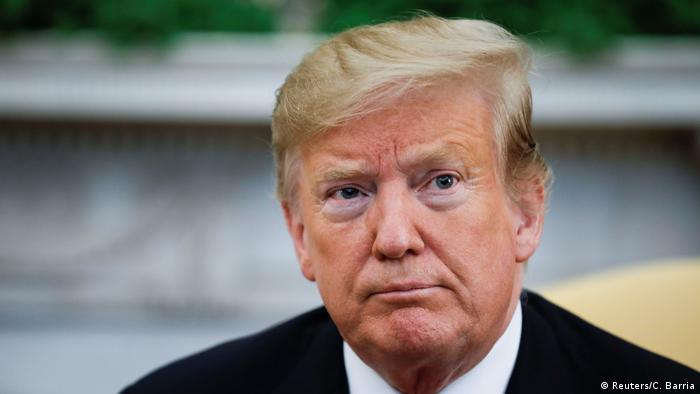 Democrats upped the pressure on US President Donald Trump on Wednesday, after officially requesting his tax returns from the Internal Revenue Service (IRS), the country's tax authority.

A committee in the Democrat-controlled House of Representatives asked for Trump's personal tax returns as well as the returns for some of his businesses from 2013 through 2018.

It's the first time in 45 years that such a demand has been made for a sitting president's tax information — because it has been customary for all presidential hopefuls to voluntarily release the information ever since the 1960s.

"We have completed the necessary groundwork for a request of this magnitude, and I am certain we are within our legitimate legislative, legal and oversight rights," Richard Neal, the Democrat who heads the House committee, said in a statement.

The move is part of an effort by Democrats to look into Trump's business dealings as well as possible conflicts of interest.

In a Twitter post that appeared to allude to the Democrats' request, Trump wrote that "there is nothing we can ever give to the Democrats that will make them happy. This is the highest level of Presidential Harassment in the history of our Country!"

Trump 'not inclined' to release returns

When asked about the Democrat's request, Trump told reporters that he "would not be inclined" to provide his returns to the committee, saying that he cannot do so as he is currently being audited.

The IRS has said that people who are being audited are still free to release their tax returns.

Trump broke with decades of tradition when he did not release his income tax returns as a candidate during his 2016 presidential campaign.

Wednesday's move is likely to launch a multi-year legal battle between Democrats in the House of Representatives and the White House.

Although Democrats argue that requesting the president's tax returns is allowed under their congressional duties, Republicans have raised privacy concerns and dubbed the move a witch hunt.

As the IRS is part of the Treasury Department, it is unclear whether Treasury Secretary Steven Mnuchin will release the tax documents to the House panel.

In March, Mnuchin told Congress that he would "protect the president as we would protect any taxpayer" when it comes to privacy.

The decision on Wednesday also comes on the heels of the conclusion of special counsel Robert Mueller's probe into Russia's interference in the 2016 election, which found that the Trump campaign did not collude with Moscow.

Allegations of collusion with the Kremlin have dogged Team Trump since the 2016 election campaign. DW takes a look at how special counsel Robert Mueller's Russia investigation unfolded. (23.03.2019)