The US has delivered military equipment worth $50 million (45 million euros) to Lebanon's security forces. Washington says the cargo aims to help Lebanon tackle the threat from militants in neighboring Syria. 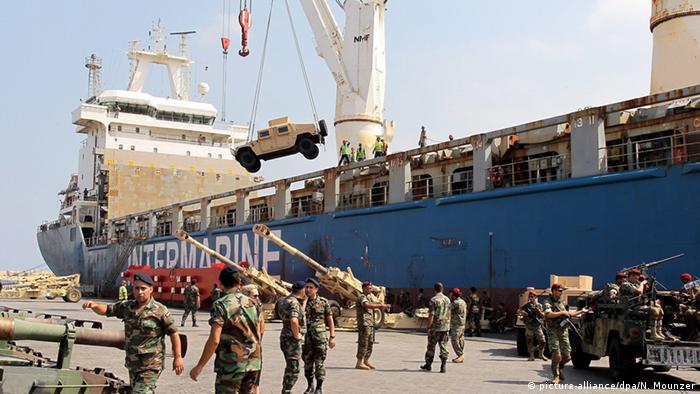 A shipment of 50 armored vehicles, 40 artillery pieces, 50 grenade launchers and over 1,000 tonnes of ammunition was unloaded at Beirut's port on Tuesday, the US embassy said.

Lebanon's army has been given US helicopters and promised more British training for soldiers guarding its border with Syria. Visiting Beirut, Britain's foreign secretary said Lebanon was a "front line" against terrorism. (31.03.2016)

Two attackers activated their bomb vests during rush hour in a densely populated quarter of the Lebanese capital, killing dozens of people, officials said. The area is a known stronghold of the Shiite Hezbollah militia. (12.11.2015)

"This year alone, we provided over $221 million in equipment and training to the Lebanese security forces," US Ambassador Elizabeth Richard told reporters.

Lebanon's security forces have periodically been drawn into clashes with jihadi groups such as the self-styled "Islamic State" (IS) on the country's northern frontier with Syria. Militants also regularly stage incursions across the border. In 2014, the Lebanese town of Arsal was briefly overrun by IS and the Nusra Front before the army drove them out again.

In recent years, the US and a number of other countries have directed funds and other support at the Lebanese military to bolster border defense capabilities against these groups. In March, the US delivered three Huey II helicopters, raising to 10 the number of such aircraft in Lebanon's fleet.

As well as violence spilling over from Syria's five-year war, Lebanon has also come under strain from more than one million Syrians who've sought refuge in the country.

Once an important backer, Saudi Arabia announced earlier this year it would no longer contribute funds to Lebanon's security forces, citing what it saw as a growing closeness between Beirut and Saudi foe Iran. Lebanon's Iran-backed Hezbollah movement has fought alongside Syrian government forces in Syria's civil war since 2013. Lebanon, which has a reputation for fragile government, emerged from its own civil war 26 years ago.