US charges suspect in assassination of Haitian president

Interpol had issued a red alert for the Colombian man in connection with the killing of President Jovenel Moise. Charges include conspiring to kidnap and conspiring to kill outside the US. 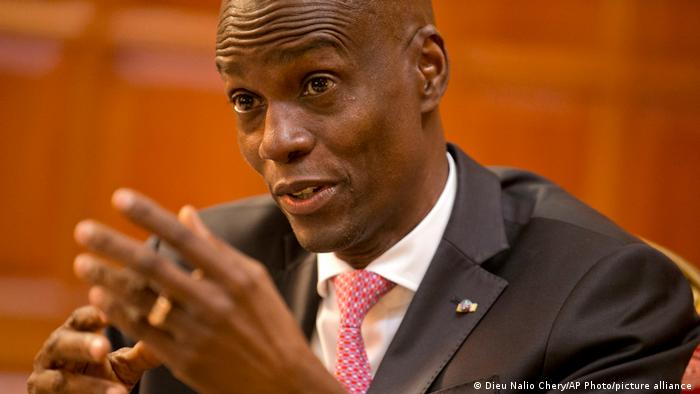 A Colombian national wanted in connection with the killing of Haiti's President Jovenel Moise has been charged by a US court. Mario P. was detained by US authorities and appeared in a federal court in Miami on Tuesday, where he was charged with providing material support resulting in death and conspiracy to kidnap and conspiracy to kill outside of the US.

Haitian authorities have so far arrested 45 people in connection with Moise's killing but have yet to formally charge anyone.

What do we know about the suspect?

Mario P. was arrested in Jamaica in October, and had been scheduled to fly to Colombia on Monday. However, according to Colombia's Director of police Jorge Luis Vargas, he was informed of the Interpol provisional arrest warrant, and that he was being extradited to the US.

The suspect is believed to have been part of the group involved in the killing of Moise at his residence in July 2021.

He is understood to be a former member of the Colombian military.

Gunmen raided Moise's private residence in the pre-dawn attack on July 7, 2021. The president was shot multiple times and his wife was critically injured.

The attackers managed to flee the scene but were tracked down by police and apprehended following a gunfight.

Haitian police arrested most of the 26 Colombians who are suspected of being part of the attack.

Officials claim Moise was killed by a 28-member hit squad composed of the 26 Colombians mentioned, and two Americans of Haitian descent.

According to Colombia's Defense Minister Diego Molano, the Colombians suspected of being involved in Moise's assassination are former members of the armed forces, who had gone to Haiti to work as bodyguards.

The Pentagon said a small number of those detained had received training with the US military while serving as members of Colombia's military.

Over the weekend, current Prime Minister Ariel Henry was the target of a failed assassination attempt.

Henry's office accused "bandits and terrorists" of making an attempt on his life at an event commemmorating independence Saturday.

Haiti has descended further into turmoil since the Moise's killing. Criminal gangs have grown in power and have been kidnapping hundreds of people in return for ransom payments.

Last year 17 US and Canadian missionaries were kidnapped by the so-called "400 Mawozo" gang. The last of the hostages was released in December.