The missionaries were visiting an orphanage when they were abducted by a gang. Haiti has already witnessed more than 300 kidnappings this year. 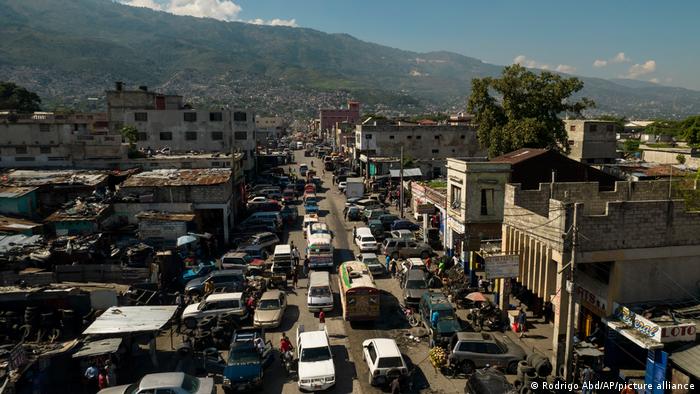 A group of US missionaries and their family members have been kidnapped by a gang outside the Haitian capital, according to the American Christian aid group which sponsored their trip.

What did the aid group say?

Ohio-based Christian Aid Ministries said in a statement that 16 US citizens were among those kidnapped, along with one Canadian national. The group includes five men, seven women and five children.

Christian Aid Ministries said the missionaries were abducted while on a trip to visit an orphanage east of the capital of Port-au-Prince on Saturday.

AFP and AP news agencies reported that the missionaries are being held by the so-called "400 Mawozo" gang, a band of criminals which kidnapped members of the French Catholic clergy earlier this year.

For months, the gang has been engaged in theft and kidnappings in the area between Port-au-Prince and the border with the Dominican Republic, according to a Haitian security source cited by AFP.

A voice message sent earlier by Christian Aid Ministries to other religious missions stated that the mission's field director is working with the US Embassy. It also said that the field director's family and one other unidentified man had stayed at the ministry's base while everyone else visiting the orphanage was abducted.

Haitian migrants expelled from US border

US authorities looking into kidnapping

Jennifer Viau, a spokesperson for the US State Department in Washington, told Reuters by email that "we're looking into this."

The US Embassy in Haiti has not issued any statement regarding the incident.

Gedeon Jean, the director of the Center for Analysis and Research in Human Rights based in Port-au-Prince, has called "for the liberation of the persons kidnapped, whether American citizens or of other nationalities."

US Congressman Adam Kinzinger, who sits on the House Foreign Affairs Committee, told CNN on Sunday that the US should use the military or police to secure the release of the missionaries without paying ransom.

A surge in gang violence has displaced thousands and hampered everyday life in the Americas' poorest country.

Violence spiraled after the assassination of President Jovenel Moise in July and an earthquake in August that killed over 2,000 people.

Armed gangs, which for years have controlled the poorest districts of the Haitian capital, have extended their hold to other parts of the city, sowing terror with kidnappings.

Gangs have demanded ransoms ranging from a few hundred dollars to more than $1 million (about €860,000), according to authorities.

Last month, a deacon was killed in front of a church and his wife was kidnapped.

At least 328 kidnappings were reported to police in the first eight months of 2021, compared with a total of 234 for all of 2020, according to the United Nations Integrated Office in Haiti.

The latest abductions come just days after high-level US officials visited Haiti and promised more resources for the country's National Police, including another $15 million (€13 million) to help reduce gang violence.

In his resignation letter, the US representative to Haiti offered his apologies to those affected by his country's recent round of deportations.

The assassination of President Moise tops off a crisis that has been smoldering in the Caribbean state for years. Politicians and organized crime gangs are equally responsible for Haiti's problems.