Video of police fatally shooting a 31-year-old Black man in Lafayette, Louisiana, was widely shared on social media. Police say the man was headed towards a convenience store with a knife when he was killed. 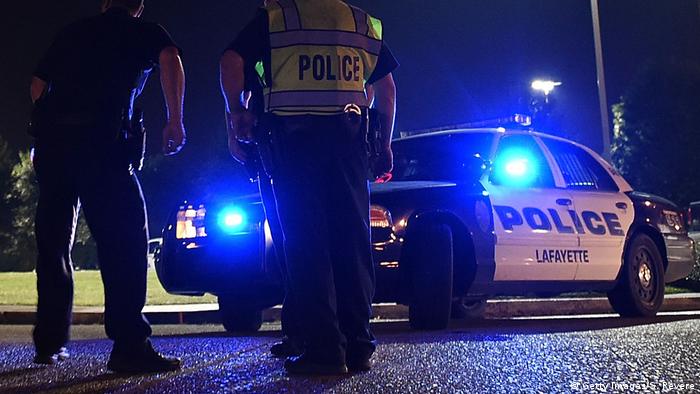 A crowd of protesters gathered outside a gas station in Lafayette, Louisiana on Saturday to demonstrate against the police killing of a Black man named Trayford Pellerin.

The shooting took place on Friday and was captured on a video that was widely shared on social media. The incident drew outrage from local civil rights groups, with the American Civil Liberties Union (ACLU) in Louisiana calling it a "horrific and deadly incident of police violence against a Black person."

Saturday's rally attracted around 150 demonstrators, according to the Advocate newspaper, and rocks and water bottles were thrown at police cars and vehicles on the nearby thruway. Officers in riot gear fired smoke canisters on Saturday night to disperse the crowd, police said.

Louisiana State Police said Lafayette officers responded to a disturbance at a convenience store on Friday and found Pellerin with a knife. The officers followed him on foot as he walked to the Shell station on the opposite side of the thruway.

Police said tasers were deployed that were ineffective in stopping him. The officers then shot him as he tried to enter the Shell station convenience store, still with a knife, according to a news release.

Interim Police Chief Morgan said the investigation has been handed over to state police, standard procedure in Louisiana for shootings by local officers. The involved officers have been placed on administrative leave with pay pending the outcome of the investigation, Morgan said.

'They gave him bullets'

The victim's mother, Michelle Pellerin, told the Advocate that she is still trying to wrap her mind around what happened. She described her eldest son as intelligent and shy and said he had sought therapy for social anxiety earlier this year. She said her son may have been frightened by the officers.

Civil rights attorney Ben Crump told the newspaper that he and his co-council Ronald Haley had begun their own investigation and may pursue legal action. Haley said he spoke to some witnesses who said Pellerin did not have a knife when he was killed.

Crump said that even if the man had a knife the officers were trained for those situations and should have found a non-lethal alternative.

"Instead of giving him a helping hand, they gave him bullets," Crump told the Advocate.