The US and China have agreed to cooperate more closely in combating global warming during a visit by Secretary of State John Kerry to Beijing. The top US diplomat also urged Beijing to ease its internet controls. 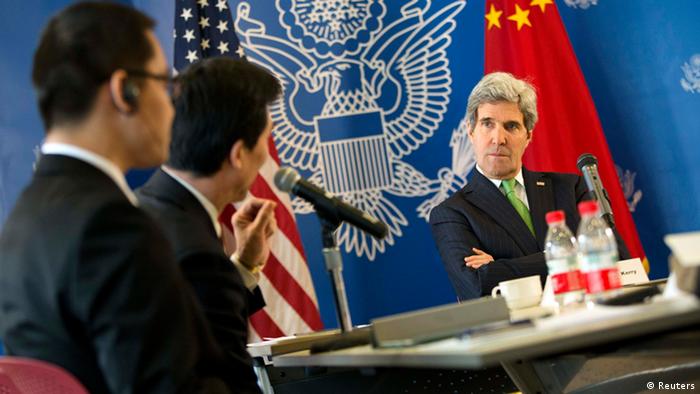 In a joint statement on Saturday the US and China said they had agreed to a series of commitments to reduce greenhouse gas emissions that trap solar heat in the atmosphere and change the climate.

"China and the United States will work together …to collaborate through enhanced policy dialogue, including the sharing of information regarding their respective post-2020 plans to limit greenhouse gas emissions," the statement read.

The two countries "commit to devote significant effort and resources to secure concrete results" by the Sixth US-China Strategic and Economic Dialogue later this year, it added.

The US and China are the world's biggest greenhouse gas emitters. As the climate changes because of the increased amount of greenhouse gases in the atmosphere, scientists warn of more severe drought and weather conditions.

The statement cited the "overwhelming scientific consensus on climate change and its worsening impacts, and the related issue of air pollution from burning fossil fuels."

"China and the United States will put an extra effort into exchanging information and discussing policies that will help both of us be able to develop and lead on the standards that need to be announced next year for the global climate change agreement," said Kerry, who is in China as part of a multi-country Asia tour.

Also on Saturday, Kerry met with Chinese bloggers in a roundtable discussion (pictured) organized by the US Embassy. He urged Chinese officials to support Internet freedoms and promised to investigate whether US companies were helping Beijing limit access to online content.

"Obviously we think that the Chinese economy will be stronger with greater freedom of the Internet," Kerry said.

Zhang Jialong, a reporter for Tencent Finance, part of China's largest social media company, was one of four bloggers at the 40-minute meeting. He urged the US to support "Chinese who aspire for freedom" and help "tear down the great Internet firewall."

He also complained US companies were helping China block access to social networking sites like Twitter and the broader Internet in general. Kerry said it was the first time he'd heard of such practices but promised to look into it.

Zhang, who has a popular microblog, was detained for three days in 2011 after posting comments about dissident Ai Weiwei's problems with Chinese authorities. He said the conditions for political and human rights activists in China has not improved.

Microblogs in China, which are similar to Twitter, have become an important tool for driving public opinion in recent years. They have allowed activists to draw attention to official corruption, pollution and other issues that challenge the ruling Communist party.