Three women have accused Gordon Sondland of sexual misconduct before he was appointed US ambassador. Sondland has said the accusations are "politically motivated." 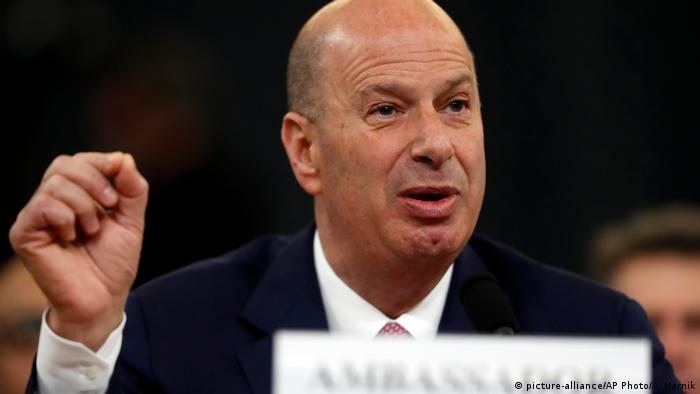 US ambassador to the EU Donald Sondland, who provided key testimony in the US presidential impeachment hearings, was accused by three women Wednesday of sexual misconduct between 2003 and 2010.

Sondland has denied all of the accusations, with his lawyer saying that the claims are an attempt to smear his credibility during the US impeachment hearings.

What is Sondland accused of?

The accusations were made in an article published by the magazine Portland Monthly in the US state of Oregon and the non-profit news organization ProPublica.

In the article, the three named women said Sondland retaliated against them professionally after they rejected his sexual advances.

One of Sondland's accusers, Jana Solis, said she met him seeking work as a hotel safety expert in 2008. She said Sondland invited her to his home and exposed himself. She also accused Sondland of forcibly kissed her, at a later meeting.

Read more: #MeToo included in Power 100 ranking of influential figures in the arts

A hotel magnate nominated as EU envoy by US President Donald Trump in 2018, Sondland's testimony provided evidence as to whether the Trump administration conducted  a pressure campaign on Ukraine to get dirt on Trump's political rivals.

Another accuser, Nicole Vogel, was seeking investment for a magazine in 2003. She said that Sondland invited her to see a hotel room and then tried to forcibly kiss her. After she refused and left, she said Sondland declined to fund her project.

Vogel is also the owner of Portland Monthly, which teamed up with investigative non-profit news group ProPublica to report on the story. Although Vogel cooperated as a source, she was not involved in editorial decisions.

In a statement, Sondland rejected all of the accusations and accused Vogel of "underhanded journalism" out of anger that he did not invest in her magazine in 2003.

The statement also said the article was produced with "deceitful journalism methods far outside the bounds of basic ethical standards."

"Both the timing and sourcing of the reporting seem obviously intended to influence congressional proceedings in which Amb. Sondland is a witness," the statement continued.

"These untrue claims of unwanted touching and kissing are concocted and, I believe, coordinated for political purposes," said Sondland.