Upon receiving the Charlemagne Prize, the UN secretary-general called for a strong and united Europe to avoid "a new cold war." He also said the EU was too important to fail. 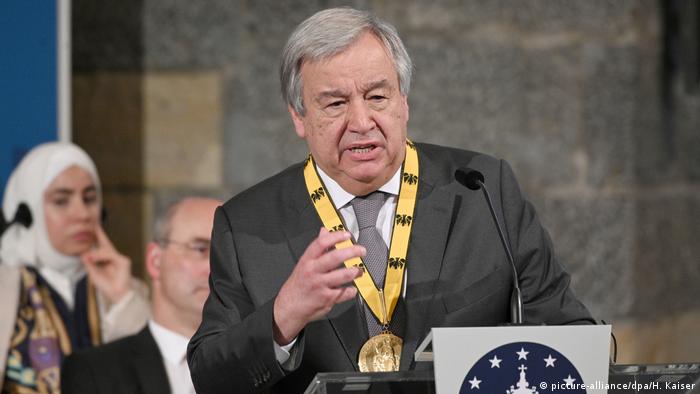 The annual prize was first awarded in 1949 and is named after the holy Roman emperor who ruled much of modern-day France, Germany, the Low Countries and Central Europe from the German city of Aachen.

Guterres, who is a former prime minister of Portugal, was chosen by the prize committee for his advocacy of cooperation, tolerance, pluralism and multilateral cooperation.

After being presented the medal in Aachen city hall's ornate Coronation Room, Guterres gave a speech highlighting the importance of a strong European Union.

"If you want to avoid a new Cold War, if you want a real multilateral order, then we have to have a united states of Europe as a strong pillar of it," he said.

Guterres said the EU was too important to fail. "The failure of Europe would inevitably be the failure of multilateralism and the failure of a world in which the rule of law can prevail," he emphasized.

As this year's Charlemagne Prize winner, Guterres joins a cadre of world leaders who have been given the honor, including British wartime Prime Minister Winston Churchill, French President Emmanuel Macron and Pope Francis.