London to New York may again be possible in under 4 hours after the US-based airline struck a deal for 15 ultrafast jets. Regular commercial supersonic flights have not been seen since 2003. 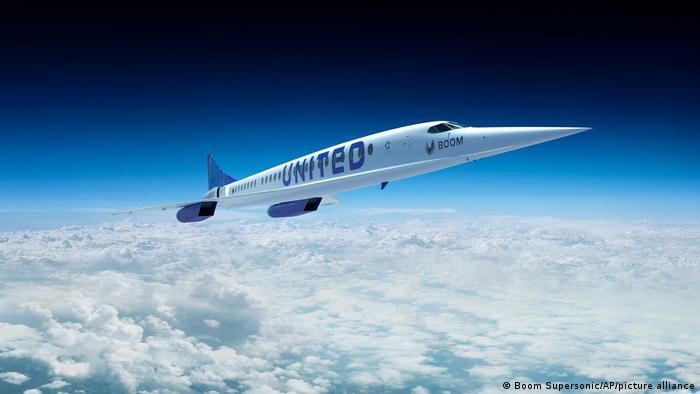 United Airlines announced on Thursday that it was planning to buy 15 supersonic jets from Denver-based aerospace company Boom Supersonic, reviving the kind of high-speed air travel not witnessed since the demise of Concorde almost two decades ago.

"We're the first US airline to sign an agreement for Boom's Overture airliners," United said on Twitter, adding the planes would be ready for take off in 2029.

Under the agreement, United will purchase the fleet once they meet the airline's safety, operating and sustainability requirements, with an option for an additional 35 aircraft should the transaction prove to be a success.

Connecting more than 500 cities, United hopes to halve flight times, with London to New York projected to take just three and a half hours, while Tokyo to San Francisco would be a six-hour flight.

The Overture plane will hold between 65 and 88 passengers while airfares will be equivalent to those of business class, according to United.

The announcement comes less than two weeks after Aerion's plans to produce a supersonic jet faltered over a lack of funding.

Supersonic planes have come under fire from environmentalists for burning more fuel per passenger in comparison with subsonic ones.

United has vowed to reduce its emissions by 100% before the year 2050. The airline said the proposed jet would be optimized to use 100% sustainable aviation fuel.

The era of regular supersonic flights came to an end in 2003 when Concorde, utilized jointly by Air France and British Airways, was retired after 27 years of service.

The plane's noisy sonic boom meant it was only permitted to break the sound barrier when over the ocean, meaning Concordes did not fly routes over large bodies of land.

Concorde's reputation suffered when a charter flight was involved in a fatal crash when taking off from Paris' Charles de Gaulle Airport in 2000. The supersonic, transatlantic jet took off for the last time three years later. Officially, airlines cited reduced demand after the September 11 attacks and rising maintenance costs, although the crash is broadly thought to have had some influence as well.

Can noise cause depression?

The COVID-19 pandemic has not only idled thousands of airplanes but likely as many pilots. Around the world, some have traded a seat in the cockpit for one on the rails, as train drivers are desperately needed.

Flights between Germany and Russia are back on after a brief suspension earlier on Wednesday in an an apparent tit-for-tat move.