No less than 41 sites - architectural and natural marvels - in Germany have been placed on UNESCO’s World Heritage list. Each is unique and authentic as well as popular with tourists. 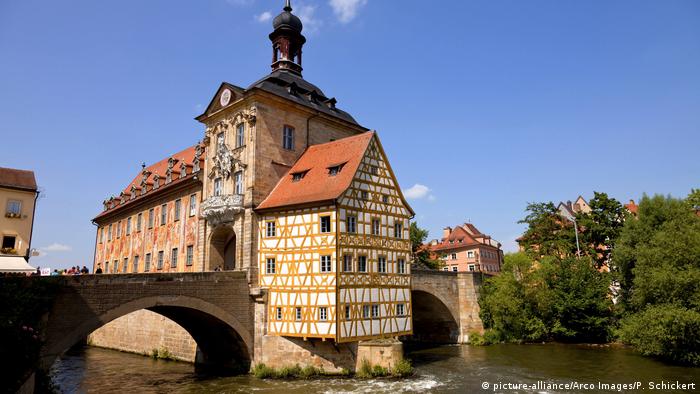 Travelers have come to see the World Heritage status as a kind of seal of quality. It implies a high universal value for the places and experiences so honored. In early July, UNESCO is to decide whether further natural or cultural sites should be added to the list of German World Heritage sites. But for now, here is an overview of the 41 already on it.

Narrow alleys and baroque stately homes give many of the historical old towns something of the spirit of past eras.  Some are sufficiently intact to qualify as part of the World Cultural Heritage. The Hanseatic cities of Bremen, Lübeck, Stralsund and Wismar have their Gothic brick facades and waterfront atmosphere in common.

Bamberg’s old town, on the other hand, brings together several eras in the history of architecture, from the 11th to the 18th centuries, and most of its buildings are originals.

Regensburg, Germany’s best preserved medieval city, conveys a feel for life in the Middle Ages - as do the half-timbered houses of Quedlinburg and Goslar in the Harz Mountains.  Their tall, bent roofs and winding streets enchant countless tourists from the world over year after year.

Eisleben and Wittenberg are both settings for the life and deeds of Martin Luther and for one of the most significant events in European history: the Reformation.  So far, six buildings have been placed on UNESCO’s World Cultural Heritage list as scenes of the Reformation, such as the places of Luther’s birth and death and the Castle Church to whose door he nailed his theses.

Twelve more sites connected with Martin Luther are among the German candidates for the World Heritage list that UNESCO will decide on in July, including his parents’ house in Mansfeld and St. Peter and Paul Church in Eisleben, where he was baptized.

Among the places offering visitors a high concentration of art and culture are Berlin’s Museum Island and Weimar, a hub of Classicism and the Enlightenment. Joining them as a site of the Cultural Heritage of Mankind is the Margravial Opera House in Bayreuth.

The first German site to be named to the World Cultural Heritage list was Aachen cathedral, in 1978. This prime example of sacred architecture was built some time around 800 CE.

Other German cathedrals have also been named as World Heritage sites, among them Germany’s oldest church, the High Cathedral of St. Peter in Trier.

Cologne cathedral is a masterpiece of Gothic architecture and, with a good six million visitors annually, one of Germany’s most popular sights. The cathedrals in Hildesheim and Speyer stand as impressive examples of Romanesque architectural style, while the Church of Wies in Steingaden, Bavaria, features sumptuous rococo décor.

World Cultural Heritage status has been awarded to several monasteries in Germany. In the Middle Ages, they were leading spiritual, political and economic centers of trade, agriculture, handcrafts, culture and education.  Civitas Corvey, the Lorsch Abbey, Maulbronn Monastery and the Monastic Island of Reichenau are more or less well preserved and significant manifestations of their time.

A number of impressive natural sites and parks are included on UNESCO’s World Heritage list. One is the Wadden Sea, among the world’s principal tidal wetland biotopes. As a stopover and wintering site for migratory birds, it has global ramifications.

Aside from the Wadden Sea, Germany hosts five of the ancient beech forests inscribed in the World Natural Heritage list. Only in Germany do these highly valuable remainders of primeval beech forests occur in the lowlands.

The Rhine Gorge, on the other hand, is a cultural landscape that has been fashioned by humankind and noteworthy for its great diversity and beauty, all of which earned it a spot on the World Heritage list.

Outstanding examples of horticultural achievement listed as World Heritage sites are the Bergpark Wilhelmshöhe, the Garden Kingdom of Dessau-Wörlitz and Muskau Park.

Architecture that Changed the World

The Bauhaus sites in Dessau and Weimar embody an epoch-making shift in architecture, art and society that called for UNESCO protection.  This is where Bauhaus directors Walter Gropius, Hannes Meyer and Ludwig Mies van der Rohe and their students lived, taught and experimented. Their efforts laid the foundation for modernist architecture.

Swiss-French architect Le Corbusier also made distinguished contributions to the modern movement.  In 2016, UNESCO declared his collected work a transnational element on the World Heritage list, comprising 17 projects in seven countries, including two houses in the model city of Weissenhof in Stuttgart.

The city of warehouses took shape from 1885 to 1927. It represents Germany’s merchant traditions and expanding international trade. Joining it on UNESCO’s list is the neighboring Kontorhausviertel, Europe‘s first quarter built exclusively as office space.

Traces of the Past: Archeological Excavations

The innate value of a number of sites lies in what they can tell us about the history of the Earth or mankind. Such are the prehistoric pile or stilt houses on Lake Constance, the Roman monuments in Trier and the Limes of Germania Superior and Raetia, the old border fortifications of the Roman Empire.

Also found in Germany and on UNESCO’s list of protected sites is one of the world’s richest troves of fossils. The Messel Pit has yielded fossils dating to an age after the dinosaurs, when flora and fauna - in particular mammals - were changing rapidly.

Monuments of the Industrial Revolution

Aficionados of the technological achievements and architecture of the Industrial age have four World Heritage sites to choose from in Germany, each illustrating both aspects.

Starting in the late 19th century, the Völklingen Ironworks in Saarland produced steel girders as Europe’s most state-of-the-art industrial complex.

The Zollverein Coal Mine Industrial Complex in Essen was once the largest of its kind in the world. Both facilities were shut down in 1986, but they have been preserved for visitors to inspect at their leisure.

The Fagus Factory in Alfeld and the ore mines of Rammelsberg and the Upper Harz Water Management System near the historic town of Goslar are further impressive achievements of human ingenuity in architecture and technology.

A Baroque palace with ornate court gardens designed by one of the most renowned architects of the time - this sums up the Würzburg Residence. It earned its place among the World Cultural Heritage sites as "the most homogeneous and extraordinary of the Baroque palaces."

No less worth seeing are the Palaces and Parks of Potsdam and Berlin as well as the Augustusburg and Falkenlust palaces in Brühl. During his time in the Wartburg near Eisenach, Martin Luther translated the Bible into German.