UNESCO poised to recognize Japanese cuisine | Asia| An in-depth look at news from across the continent | DW | 11.11.2013

The rich, complex tastes and textures of "washoku", or Japanese cooking, could be added to the UN's Intangible Cultural Heritage list as early as December. Julian Ryall takes us on a culinary tour of Japanese cuisine. 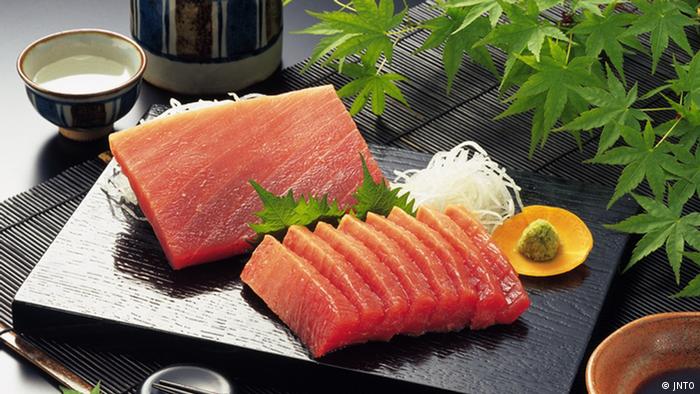 From sushi through "ramen" noodles, succulent "wagyu" beef, lightly battered "tempura" and all the way down to the individual ingredients that make these Japanese dishes so exceptional - soy sauce, fresh vegetables, "nori" seaweed - Japanese food is regarded around the world as exceptional. And rightly so.

More restaurants in Tokyo have been awarded Michelin stars than Paris, the self-styled home of gourmets. Japanese food of all styles and flavors can be found from Berlin to Brisbane and many places inbetween. It is known to be healthy, while dining out does not have to be expensive.

Now, UNESCO is on the brink of recognizing just what Japan brings to the world's table with its cuisine, with a preliminary screening supporting "washoku" - Japanese cuisine - being added to the Intangible Cultural Heritage list, elevating it to a par with French cuisine, Mediterranean dishes and traditional food from Mexico.

"The first thing that makes Japanese cooking special is that is it rich in 'umami,' the fifth flavor after sweet, salty, sour and bitter," said Yukari Sakamoto, who trained as a chef and sommelier in New York and now authors books on Japanese cuisine. 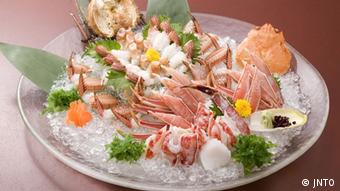 Seafood plays a key role in Japanese cooking, like this dish with crab

"Take a simple dish of boiled spinach, for example," she said. "That's fine, but if steeped in 'dashi' stock, then it will be rich in umami and even a very basic dish can explode in the mouth."

In contrast to French food, which incorporates lots of sauces and utilizes butter and oil, Japanese cuisine is very simple, but still able to provide plenty of rich flavors and textures, Sakamoto says.

Some of the dishes that are staples in Japan have been known beyond these shores for many years, but it was the release of the first Michelin Guide to restaurants in Tokyo in November 2007 that suddenly put the spotlight on just how fantastic an experience eating out in the Japanese capital can be. And since then, the fact that Tokyo restaurants have been awarded more stars than Paris has captured the headlines.

"Tokyo has become the world culinary capital, ahead of Paris," Michelin guide director Jean-Luc Naret told a press conference for the unveiling of the guide. "We give stars where we find them and in Tokyo the culinary richness is extraordinary."

In that initial guide, 11 restaurants had been awarded three of the coveted stars, 42 were identified as two-star establishments and a further 144 received one star. 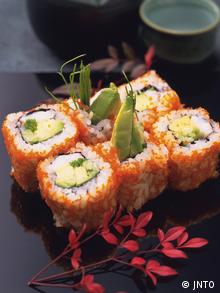 Tokyo has retained its position as the culinary capital of the world in subsequent editions of the food-fans' bible - although, in truth, it has an advantage over Paris in that it has four times the 40,000 eating establishments that are to be found in Paris - while new versions have identified yet more top-notch restaurants in Osaka, Kyoto and on Hokkaido, the most northerly of Japan's main islands.

"Everybody is hungry for Japanese food," said Sakamoto, who also gives classes in cooking Japanese food and leads food tours in Tokyo, such as through the Tsukiji wholesale market, famous for landing virtually all the seafood that is consumed in and around Tokyo.

"Before, people just wanted to walk through the market, but now they have become far more knowledgeable about eating Japanese food. They know what good ramen tastes like, and what 'yakitori' and 'takoyaki' is."

"These visitors want to understand even more and they are getting a far richer experience out of their time here, " she said.

Such is the appeal of Japanese cuisine - and the government's determination to have it recognized around the world - that the authorities here are considering creating a new category of visa that will permit foreign chefs to improve their skills at a Japanese restaurant over a period of two years.

The aim is to create a new generation of "Japanese food evangelists" who will help to further spread the word and add to the 55,000 Japanese restaurants that can already be found outside the country. One key task will be to improve the quality and authenticity of the meals served in those establishments.

The quality they should strive to achieve can be seen in a restaurant such as Kitcho, a Michelin three-star restaurant in the Arashiyama district of Kyoto. 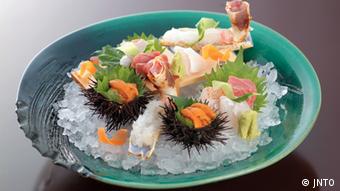 From only the finest quality ingredients, to the decor, service and hospitality, the scent of incense, the arrangement of flowers or a scroll chosen to appeal to the customer and the occasion, the attention to detail is minute.

Founded by Teiichi Yuki more than 80 years ago, the present owner is his grandson, Kunio Tokuoka, and continues to serve meals that are deeply influenced by Japan's age-old tea ceremony.

"Kaiseki is taking everything that is available and using that to express your feelings to the person who is gracing your presence," says Tokuoka.

With the arrival of autumn, Tokuoka and his team of chefs are beginning to work with the ingredients that are coming into their own at this time of year.

A regular delicacy is shrimp croquettes with Kyoto taro and accompanied by grilled sword beans, carrot and shiitake mushrooms in a creamy sauce made of daikon radish, kelp, onion and butter.

A Tokuoka original is the steamed "yuba" wrap, in which a Chinese yam and salt-water eel are surrounded by a wrap of soymilk skin that is a locally made specialty.

Mushrooms are as treasured in Japan as truffles are in Europe at this time of year, with another seasonal delight a combination of "matsutake" mushrooms and pike conger.

And as Tokuoka points out, Japan's cusine is far more than just the remarkable array of tastes and textures; it is also about the way in which the food is presented, the contrasting or complementing colors that are used, the scents and sounds that appeal to our other senses.

It is this "omotenashi," or the Japanese style of hospitality, that provides the full experience of a "washoku" meal.

Never before have German restaurants been awarded so many Michelin stars. The reason? Creative cooking that has embraced ingredients from far outside Germany's borders, and a clientele willing to pay for it. (10.11.2013)

Pumpkins had a bad reputation for many years and were considered poor man's food. But the underdog gourds have made a major comeback. Nowadays, Germans can't get enough of the autumn treasure. (05.11.2013)