Fighting in eastern Ukraine has killed more than 5,350, the UN has said. At least 224 civilians have died in the past three weeks alone. Moscow has called for direct talks between Kyiv and rebels. 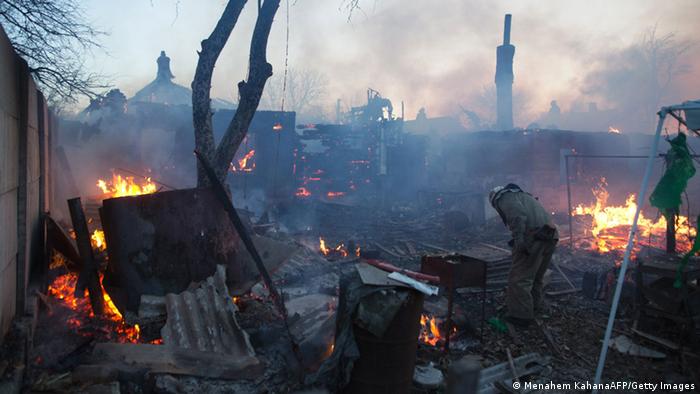 Hostilities between pro-Russian rebels and Kyiv's forces in eastern Ukraine have killed 5,358 since the conflict began last April, the United Nations reported Tuesday. At least 224 civilians died in the past three weeks, the UN report said.

"Bus stops and public transport, marketplaces, schools and kindergartens, hospitals and residential areas have become battlegrounds… in clear breach of international humanitarian law," UN High Commissioner for Human Rights Zeid Ra'ad al Hussein said, adding that another 545 civilians had been injured in the past three weeks.

The UN commissioner urged both sides to make the protection of civilian lives an "utmost priority," especially since representatives of armed groups had rejected the ceasefire agreement and their "vowing to scale up the offensive was extremely dangerous and deeply worrying."

Rebels on Tuesday said at least eight people had died and 22 others were wounded by artillery fire. Ukrainian military spokesman Andriy Lysenko said five servicemen had died and 27 were injured in fighting in the same time period.

Following US and EU accusations of Moscow supporting rebels in eastern Ukraine, Russian Foreign Minister Sergei Lavrov called on Kyiv to talk directly to separatists rather than pointing fingers at Moscow, the RIA news agency reported.

Lavrov was scheduled to meet NATO chief Jens Stoltenberg at the Munich Security Conference beginning Friday, raising hopes of a breakthrough in the Ukraine conflict.

Meanwhile, rebel leaders in Donetsk were fighting to gain control of Debaltseve, a strategic railway hub between Luhansk and Donetsk. On Monday, Alexander Zakharchenko said separatists would mobilize 100,000 troops in the Luhansk and Donetsk regions.

Following Zakharchenko's announcement, the US also said it was mulling sending weapons to help Kyiv's efforts in tackling the rebels.

Fighting continued Monday around a strategic railway hub in eastern Ukraine. Around 15 civilians died over the weekend in fighting between pro-Russian rebels and Kyiv's forces. (02.02.2015)