UN: More than half a million have fled Ukraine

Poland has received the largest group of refugees, numbering 281,000. The EU is preparing to grant Ukrainians the right to stay and work in the EU for three years. 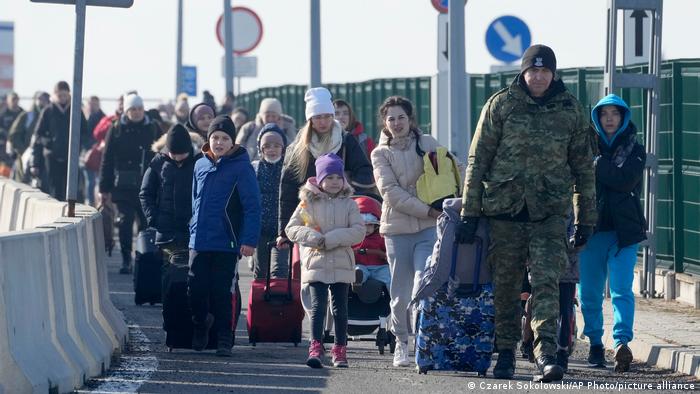 Poland has received around 281,000 refugees from Ukraine, according to the UN refugee agency

More than half a million people have fled Ukraine since Russia launched a full-scale attack on the country, the United Nations said Monday.

According to the UN, more than half fled into Poland.

Where are Ukrainian refugees going?

"More than 500,000 refugees have now fled from Ukraine into neighboring countries," UN refugee chief Filippo Grandi said in a tweet.

The UN agency said that many refugees were moving onward to other European countries, and some 34,600 had already done so.

Meanwhile, a spokesperson for the German interior ministry said that 1,800 refugees from Ukraine had arrived in Germany so far.

On Monday, a train carrying hundreds of people arrived in the southeastern Polish city of Przemysl.

EU to grant fleeing Ukrainians right to stay and work

The EU is preparing to allow fleeing Ukrainians the right to stay and work in the 27-nation bloc for up to three years, senior EU and French officials said.

At least 300,000 Ukrainian refugees have entered the EU so far, and the bloc needs to prepare for millions more, they said. EU members Poland, Romania, Slovakia and Hungary have land borders with Ukraine.

"It is our duty to take in those who flee war," French Interior Minister Gerald Darmanin told France 2 TV on Monday, saying the EU interior minister had on Sunday tasked the European Commission with preparing draft proposals to grant them protection.

Ministers will meet again on Thursday to agree on details. The EU temporary protection directive, drawn up after the 1990s war in the Balkans but so far never used, provides for the same level of protection for one to three years in all EU states. That includes a residence permit, as well as access to employment, social welfare and medical treatment.

Thousands of African students are stuck in Ukraine

Thousands of Africans studying in Ukraine are desperate to leave as Russia invades the country. But, with flights grounded and other options limited, there isn't much that their governments can currently do.