Despite opposition from African and Arab nations, the UN Human Rights Council passed a resolution aimed at combating worldwide discrimination based on sexual orientation and gender identity. 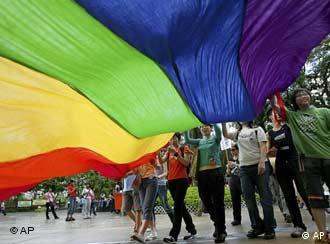 The resolution is seen a as progress for gay rights

On the final day of the United Nation Human Rights Council's latest 18-day session, a resolution was passed that seeks to combat acts of violence and discrimination around the world based on a person's sexual orientation or gender identity.

The resolution calls for a worldwide study to be conducted into discriminatory laws and practices based on sexual preferences and to look at how human rights law could be put to use to end related violence and human rights violations.

Despite opposition from Russia as well as several African and Arab countries, the resolution passed narrowly, with a final tally of 23 to 19, with three abstentions.

"The resolution before us today does not seek to impose values on other states," Matjila said. "It seeks to initiate a dialogue which will contribute to us ending discrimination and violence based on sexual orientation and gender identity."

However, Matjila's views were not shared by other African countries, who accused South Africa of breaking ranks and siding with the West on a resolution that other African nations opposed. 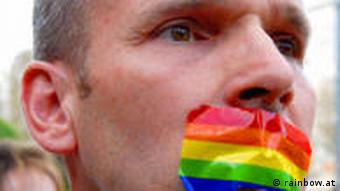 Sexual discrimination is widespread in many parts of the world

"We are dealing with a matter that falls outside of human rights," said Nigeria's delegate to the Council, Ositadinma Anaedu, implying that issues of sexual orientation or gender identification were personal matters not specifically addressed in binding international human rights laws, and therefore should not concern the Human Rights Council.

Pakistan's Shafqat Ali Khan, speaking on behalf of the Organization of the Islamic Conference, called for a vote on the matter and expressed his intent to vote no.

"We are seriously concerned at the attempt to introduce to the United Nations some notions that have no legal foundation in any international human rights instrument."

The debate concerning the Human Rights Council's authority to pass resolutions associating sexual orientation and gender identity with human rights comes from the fact that there is no specific mention of sexual preferences in established human rights treaties.

However, Amnesty International's Whitney Brown said just because there is no specific mention does not mean sexual preferences are not part of basic human rights.

"The principle of non-discrimination and equal protection of the law applies even to people who are excluded sometimes based on their sexual orientation and gender identity," she told Deutsche Welle. "You can see [the resolution] as an authoritative interpretation of binding treaty law, which does prohibit discrimination."

The study called for in the resolution is expected to be concluded by the end of the year. Brown said she thinks this will bring to light laws in some nations that target people based on their sexual orientation and gender identity.

"I think as a result of that document, you will see a lot of human rights activist lobbying their governments to get those laws repealed," she said.

Despite the fact that South Africa presented the resolution to the Human Rights Council, discrimination based on sexual orientation in widespread in Africa, Brown said.

She pointed out that while South Africa was the world's first nation to include the principle of non-discrimination based on sexual orientation in its constitution when it was drafted in the 1990s, making them a leader at least in terms of the law, the rest of the continent has been slow to follow suit. But even that tide is changing.

"What we're seeing in Africa that is very positive is debate in the public domain," Brown said. "It's happening because there is so much exclusion and violence against people because of their sexual orientation, but you're still surfacing the issue and allowing the conversation to happen."

Germany still treats same-sex partnerships and heterosexual marriages differently, but the EU's top court says married couples or those in registered partnerships must get the same pension benefits. (11.05.2011)

Holding a spot as a judge in the Constitutional Court is a particularly respected office in Germany. The body's newest judge is a young, unconventional feminist who brings new perspectives to the court. (06.01.2011)