UN: Food imports needed to 'stave off famine' in Yemen

The UN has warned Yemen is at risk of famine, with 76 percent of the population in need of humanitarian aid. The saudi-led coalition has authorized a major port to operate, allowing supplies to reach those in need. 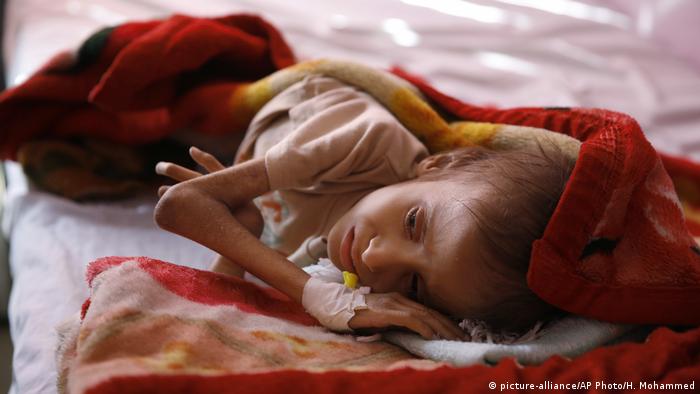 The World Food Program (WFP) on Tuesday heralded as a "breakthrough" the Saudi-led military coalition in Yemen's authorization of a major port to operate, allowing the offload of desperately needed food supplies, while warning that the country was at risk of famine in 2018.

The coalition has authorized for the main rebel-held port of Hodeida, which handles 70 percent of imports, to operate until January 19.

On Monday, a ship carrying the four cranes docked in Hodeida after months of being blocked by the Saudi-led coalition supporting Yemen's internationally recognized government.

As the war between rebels and the Saudi-backed government nears its fourth year, more than three-quarters of Yemenis are now in need of humanitarian aid and some 8.4 million people are at risk of famine, up from 6.8 million in 2017, the United Nations said.

"We appeal to parties on the ground in order to stave off famine so that we can continue regularly to get food, medicines in, be it from humanitarian or the commercial side," Bettina Luescher of the UN's WFP told a Geneva briefing.

"This will allow for faster delivery of relief items for Yemeni families in the grips of the world's biggest hunger crisis," he said.

The United Nations' efforts to address what the UN secretary‑general has described as "the world's largest humanitarian crisis" have been hampered by a crippling blockade of rebel-held ports by the Saudi-led coalition that intervened in support of the ousted government in March 2015.

After a rebel missile attack on Riyadh airport in November, the coalition even stopped UN aid deliveries but it has since eased that measure.

A total of 9,245 people have been killed in Yemen since the coalition intervened in 2015, according to World Health Organization figures, and more than 50,000 have been wounded, as well as millions displaced from their homes.

In addition to violence and food shortages, communicable diseases have also taken a hold on the war-torn country.

A diphtheria outbreak is "spreading quickly", with 678 cases and 48 associated deaths in four months, Fadela Chaib of the World Health Organisation (WHO) said, adding that a vaccine campaign had begun in the country.

Additionally, more than 1 million people have contracted cholera with more than 2,000 deaths as a result, according to the International Committee of the Red Cross.

Yemen: What will change after Ali Abdullah Saleh's death?

The killing of Ali Abdullah Saleh has opened a complicated new chapter in the ongoing war in Yemen. But will the former president's death have any impact on efforts to reach a peaceful solution to the brutal conflict? (05.12.2017)

The UN's World Food Program has issued its latest report on food crises, as children's agency UNICEF warns of an increase of cases of cholera in Somalia. Armed conflict and natural disasters are the main causes. (01.04.2017)

The top UN official in Yemen says all sides in the country's conflict are indiscriminately killing civilians. He said airstrikes by the Saudi-led Arab coalition alone killed 68 noncombatants in one day. (28.12.2017)