Martin Griffiths flew to Sanaa ahead of talks with Houthi rebels and representatives of the Yemeni government. The UN envoy is hoping to resolve the warring sides' disagreements over the recently negotiated ceasefire. 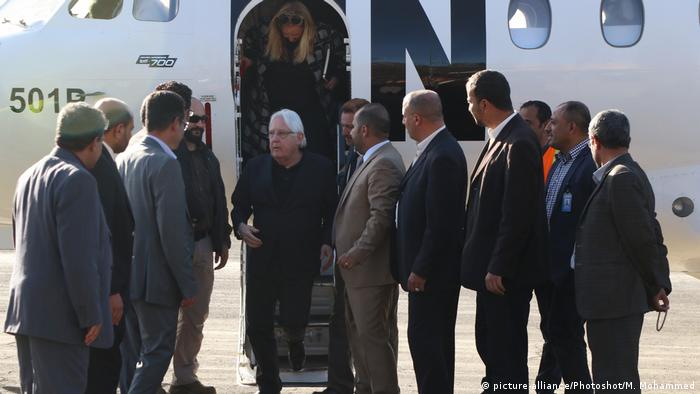 The UN envoy for Yemen, Martin Griffiths, was due to visit the port city of Hodeida on Sunday, as part of a trip to support a recent ceasefire in the war-torn nation. The Red Sea port in Hodeida is the entry point for the majority of imports to Yemen, where more than 22 million people now depend on humanitarian aid to survive.

Griffiths arrived in the capital, Sanaa, on Saturday. He is scheduled to hold talks there with Houthi rebel leaders before heading to the Saudi capital, Riyadh, to meet with Yemeni government officials.

In Sanaa, Griffiths will also meet retired Dutch general Patrick Cammaert, who has been appointed by the UN to head a truce monitoring team.

Yemen's warring factions agreed to the ceasefire in Hodeida during UN-led talks in Sweden in December 2018. Under the deal, both the handover of Hodeida port and the redeployment of troops should have been completed within 14 days of the truce, which took effect on December 18.

But that deadline has already lapsed. A member of the government's truce monitoring team told the AFP news agency that no agreement had yet been reached on who should be responsible for the port.

Griffiths played a key role in the ceasefire negotiation and is hoping that during his trip he can push the two opposing sides to fully implement it, officials said.

This will not be an easy task, as both sides believe that they should run the port.

Yemen's government has insisted that the port should be handed over to "the local authorities in accordance with Yemen law," an official who requested anonymity told AFP.

As such, the government believes the port should be handed over to officials who ran the facility before the Houthis captured Hodeida in late 2014, the official said. But the Houthis insist that "the local authorities" actually refers to the officials currently running the port, with whom they share an alliance.

Yemen has been consumed by the conflict between the Iran-backed Houthi rebels and the Saudi-backed central government since 2015, when President Abedrabbo Mansour Hadi fled into Saudi exile and the war escalated.

The conflict has unleashed the world's worst humanitarian crisis, according to the UN, which says 14 million Yemenis are on the brink of famine.

Shiite rebels said they handed over control of the key Red Sea port of Hodeida to local officials as part of a ceasefire deal with Yemen's Saudi-backed government. But pro-government forces have cast doubt on the claim. (30.12.2018)

Children were not adequately protected from conflicts in 2018, according to UNICEF. The children's fund said thousands of boys and girls were directly victims of war violence this year. (28.12.2018)

Only a day after warring parties agreed to a ceasefire, fighting has broken out near the port city. UN officials have urged the Security Council to act swiftly and send monitors before the situation deteriorates. (15.12.2018)