The UNHCR has said Sudanese security forces shot a man in the head and raped several women during protests against the country's military leaders. More protests are expected over the coming days. 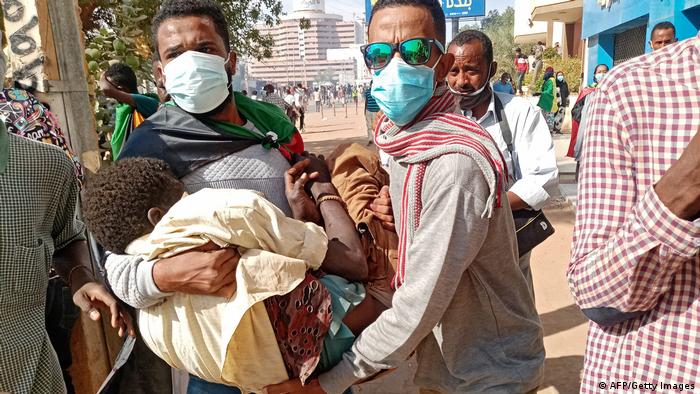 The UN Human Rights Office (UNHCR) on Tuesday confirmed that a second person had died in the wake of Sunday's brutal crackdown on protests across Sudan. UNHCR spokeswoman Liz Throssell also said her office had received more than a dozen allegations of rape and gang rape carried out by security forces.

The incidents occurred as hundreds of thousands of Sudanese gathered to protest the army's October 25 military coup as well as a November 21 agreement that saw Prime Minister Abdalla Hamdok return to his post after being removed from office on October 25.

In the capital, Khartoum, protesters were dispersed by security forces after they converged on the presidential palace for a sit-in.

Speaking of the violence of the crackdown and the rape allegations that the UNHCR had received, Throssell said, "We urge a prompt, independent and thorough investigation into the allegations of rape and sexual harassment as well as the allegations of death and injury of protesters as a result of the unnecessary or disproportionate use of force in particular the use of live ammunition."

How long have protests been going on in Sudan?

The death of the first protester was reported Monday. Details of the death of a second man, a 28-year-old, were released by the Central Committee of Sudanese Doctors, which said he had died from "a bullet in the head." A total of 47 people have died since protests began in the country in October.

Moreover, the committee previously put the number of injured from Sunday's protests at 300. Doctors said that most injuries were the result of live ammunition fire and tear gas.

A spokesman for Sudanese military leader Abdel Fattah al-Burhan claimed the army was determined to uphold security and that it was firmly behind the people's desire for democracy, promising "free and fair elections" in 2023.

Prime Minister Abdalla Hamdok, who says he only signed the November 21 agreement with the army to end violence and save the economy, has yet to comment on Sunday's events.

Sunday's protests marked the three-year anniversary of mass demonstrations that ultimately forced Omar al-Bashir, who ran the country from 1989 to 2019, from power.

A major protest organizer, the umbrella group Forces for Freedom and Change, has called for renewed demonstrations on December 25 and 30.