Thousands of anti-coup protesters in Khartoum were met with tear gas and stun grenades. Security forces have blocked major routes and bridges into the city. 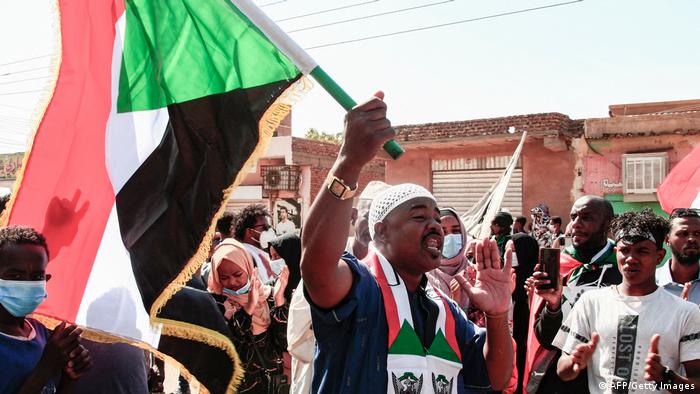 Tens of thousands of Sudanese protesters were met with tear gas and stun grenades as they marched on the presidential palace in Sudan's capital of Khartoum on Sunday, marking three years since the popular revolution which led to the end of autocrat Omar al-Bashir's rule.

According to the Sudanese health ministry, 123 people were injured in the skirmishes.

Less than a kilometer from the presidential palace, demonstrators chanted: "The people are stronger and retreat is impossible."

Those gathered in Khartoum and nearby Omdurman shouted slogans against military chief General Abdel-Fattah Burhan.

In the run-up to Sunday's marches, security forces had sealed off major roads and bridges leading to the area.

Civilian leader Prime Minister Abdalla Hamdok had initially been detained by the military but was then reinstated on November 21.

Many have expressed dissatisfaction with Hamdok's reinstatement because they argue it legitimizes the October coup.

There have been successive protests since the October coup and the Central Committee of Sudanese Doctors said that 45 people have been killed by security forces since the military takeover.

Last week DW reported on how security forces including the Rapid Support Forces had used anti-aircraft weapons and armor-piercing rounds on anti-coup protesters.

Nongovernmental organizations and rights groups have condemned the use of heavy weapons against civilians as being in breach of humanitarian agreements that call for protecting civilians.

Hamdok has stressed that he wants to avoid further bloodshed and warned in a statement on Saturday of "the country's slide toward the abyss," and called for restraint among protesters.

"We're facing today a sizeable regression in the path of our revolution that threatens the security of the nation, its unity and its stability," Hamdok said.

Protest organizers have vowed in a slogan: "No negotiation, no partnership and no legitimacy."