The UN has called for "urgent measures to spare civilians" amid reports of locals trapped by fighting in Myanmar's conflict-ridden Rakhine State. Scores have been killed and tens of thousands displaced by the conflict. 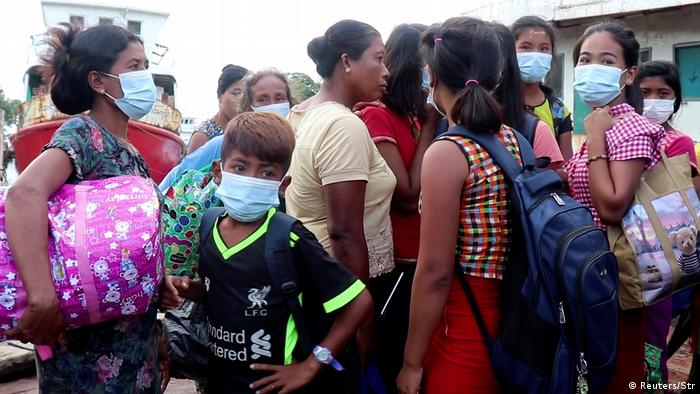 The United Nations on Sunday said it was concerned by the humanitarian impact of fighting in western Myanmar's Rakhine and southern Chin states.

The UN cited reports of increased fighting between Myanmar's armed forces, the Tatmadaw, and the Arakan Army, an insurgent group fighting for more autonomy for ethnic Rakhine Buddhists.

Both factions have traded allegations of abuse.

An increasingly bloody civil war between government troops and the rebels erupted in January last year, displacing some 150,000 people and forcing them to flee their homes while dozens have been killed and hundreds wounded.

The UN urged both sides to "take urgent measures to spare civilians." It also called for them to respect international humanitarian law as well as reiterating the need for a ceasefire with the ongoing COVID-19 pandemic.

People were trapped by the fighting or lacking the means to move out of its way, the UN said in a statement. Houses and other civilian property were reportedly damaged or destroyed, it added.

Others are believed to have fled after the military-controlled border affairs ministry issued an evacuation order warning of a "clearance operation" this week.

The term is how the military described a 2017 campaign in Rakhine state in response to an attack by a Rohingya insurgent group. It led to accusations of genocide, amid reports that soldiers murdered and raped civilians en masse.

The Myanmar government has repeatedly refused requests by the UN envoy to enter the country. Lee had previously accused the army of genocide and other war crimes against Rakhine's Rohingya Muslim minority in 2017, when some 700,000 escaped an army crackdown.