Two Russian pranksters have tricked UK Foreign Secretary Boris Johnson into believing he was on the phone with Armenian leader Nikol Pashinyan. They told Johnson that Jeremy Corbyn's aides were paid by the Kremlin. 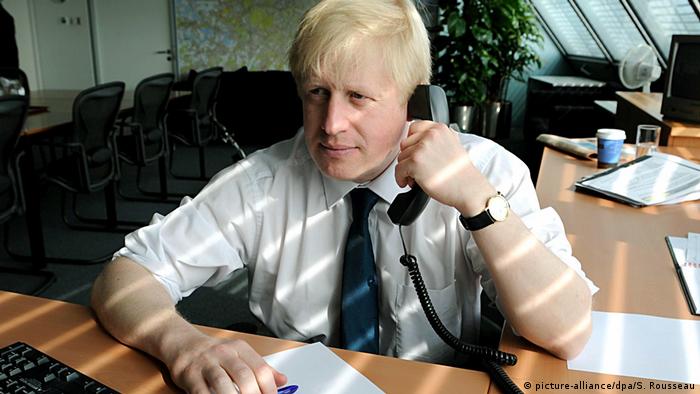 Foreign Secretary Boris Johnson was the target of a hoax that saw him call a person he believed to be Armenia's newly appointed Prime Minister Nikol Pashinyan, and talk to him for over 18 minutes, UK officials confirmed on Thursday.

In fact, Johnson discussed global politics with a Russian prankster in a call set up by the team of internet provocateurs Alexei Stolyarov and Vladimir Kuznetsov.

The duo posted the audio recording of the call online.

"This shouldn't have happened and an investigation is under way to determine the circumstances around this call and to make sure this doesn't happen again," said the spokeswoman for British Prime Minister Theresa May.

The call opens with Johnson offering his congratulations to the Pashinyan impersonator on the election victory in Armenia, and inviting him to visit London. The fake Pashinyan then tells Johnson he is scheduled to meet Russia's Vladimir Putin next week and asks Johnson for advice on dealing with the Russian president.

"I hope he will not poison me with Novichok," the man says, extolling a laugh from Johnson.

"Well, it's very important, I think, prime minister, that we don't have a new Cold War." Johnson replies. "I don't want that, nobody in the UK wants that."

"I personally feel that Russia has made a terrible mistake […] by trying to kill Sergei and Yulia Skripal with Novichok," the UK foreign secretary adds.

He also advises his interlocutor to be clear with Putin, saying that "the only thing that Russians respond to is determination and firmness."

The two then discuss a range of global issues, with the fake Pashinyan praising Johnson for his rude limerick at the expense of Turkish strongman Recep Tayyip Erdogan. Two years ago, Johnson won a rude poetry competition in which he insinuated the Turkish president had sex with goats.

The UK's top diplomat seemed to first grow suspicious some 15 minutes into the conversation, when the man says Putin boasted to him about his influence over the UK Labour party, which is currently in opposition.

The Pashinyan impersonator said that, according to information shared by Putin, Russian politician and media personality Ksenia Sobchak recently traveled to London to meet aides of Labour leader Jeremy Corbyn and give them money.

Jonson thanks the man "for that interesting tidbit of information."

"I am sure our intelligence will be listening on this line, they would draw the relevant conclusions," he says.

Corbyn: Theresa May cannot be trusted

The prankster than refers to a conversation with Ukrainian President Petro Poroshenko, saying the Ukrainian leader was poisoned, but was saved due to a special antidote which he always carries with him. The man says the name of the antidote is "opohmel" which is a Russian term for a small amount of alcohol consumed to ease symptoms of a hangover.

After struggling to pronounce "opohmel", Johnson goes silent and gets off the line.

"We checked it out and knew immediately it was a prank call," the UK Foreign Office said in a statement.

"The use of chemical weapons in Salisbury and Syria, and recent events in Armenia are serious matters," they added. "These childish actions show the lack of seriousness of the caller and those behind him."

The gaffe-prone politician is not the first one to be targeted by Stolyarov and Kuznetsov. The duo claim they managed to reach US ambassador to the United Nations Nikki Haley by using the name of Polish Prime Minister Mateusz Morawiecki, in addition to targets like US senator John McCain, Turkey's president Recep Tayyip Erdogan, and even musician Elton John.

Commenting on Johnson's call for the Russian mass-circulation daily Kosmomolskaya Pravda, prankster Vladimir Kuznetsov said he and his partner were surprised that Johnson turned out to be "a smart diplomat, an intellectual."

He added it was "the first time we spoke to someone who is not an idiot."

Boris Johnson: 'No attempt to take innocent life on UK soil will go either unsanctioned or unpunished'