The sanctions include asset freezes and travel bans targeting individuals and groups linked to the ongoing crisis in eastern Ukraine. Bloc leaders are set to meet Thursday for a crisis summit. 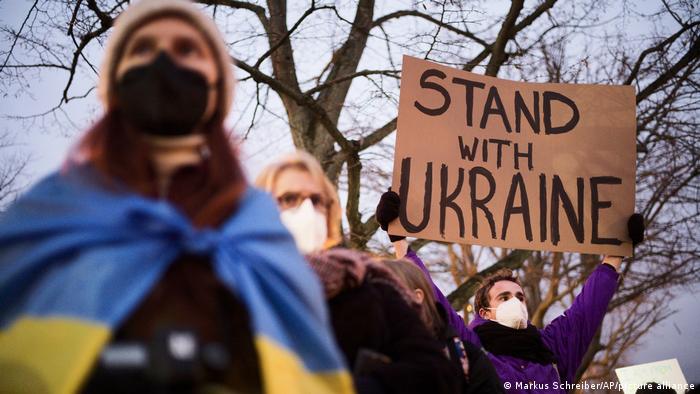 European Union sanctions against Russia came into effect on Wednesday, the first step in a series of measures the bloc plans to take if  Russian President Vladimir Putin orders an attack or pushes his troops deeper into Ukraine.

The financial penalties target top Russian government officials, several companies and hundreds of lawmakers who voted in favor of recognizing the independence of separatist-controlled parts of eastern Ukraine.

Sanctions include asset freezes and a travel ban for the listed individuals to anywhere in the EU, where many wealthy Russians have extensive properties.

The package also prevents the Russian government and Central Bank from accessing finance on the EU's capital markets. In addition, the measures slap a ban on trade between the European Union and the would-be breakaway regions in Ukraine's eastern Donbas area.

Russia is already under numerous EU sanctions that were put in place following its 2014 annexation of Crimea. These sanctions related to Moscow's financial, energy and defense sectors, as well as goods that can be used for both civilian and military purposes.

Among those sanctioned were Russia's defense minister Sergei Shoigu and serving military chiefs.

The 27-nation bloc also imposed those measures on the head of Russia's state-run television channel RT and the foreign ministry's spokeswoman, the EU's official journal said.

He also announced that bloc leaders would be meeting in Brussels on Thursday to dicuss the Ukraine-Russia crisis.