Pro-Russian separatists in Ukraine have started moving their remaining heavy weapons away from the front line, according to rebel sources. Kyiv and the rebels traded accusations for the latest shelling of civilians. 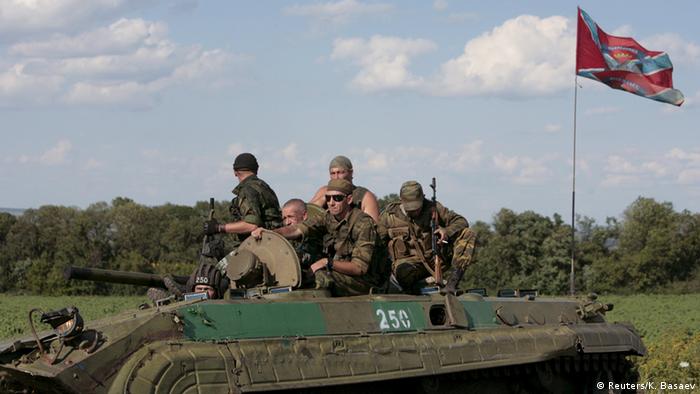 Pro-Russian rebels have begun the pullback of weapons with a caliber smaller than 100 mm, including tanks and armored vehicles, officials from self-proclaimed republics of Donetsk and Luhansk announced on Sunday. The weaponry is to be relocated at least 3 kilometers (1.9 miles) from the combat zones.

"That is our unilateral step towards peace. We are showing the whole world that we are fulfilling the Minsk Agreement," the head of the Luhansk separatist militia Sergei Koslov said, according to local media cited by the dpa news agency.

The pullback could be completed by late Sunday, according to the rebels.

However, the pro-Russian forces could bring them back "if the Ukrainian side attempts to breach the front line, or conducts shelling endangering the lives of civilians or Donetsk army" senior rebel commander Eduard Basurin told the local news agency DAN.

Kyiv forces have not received orders to pull their own guns back, in response to the alleged rebel move, a Ukrainian army spokesman said on Sunday.

Both sides had already agreed to withdraw the larger weapons, above the 100-mm limit, in February. But neither side has fully complied with the agreement, according to the Organization for Security and Cooperation in Europe.

In turn, the Ukrainian army officials accused the rebels of firing 152 and 122-mm shells into the area near the Donetsk airport, killing one civilian and injuring several others.

More than 6,400 people have been killed since the war started in April 2014, according to the United Nations.

Dozens of professional Russian soldiers are facing trial after abandoning a training base, according to media reports. The soldiers were allegedly pressured to "volunteer" for fighting in Ukraine. (11.07.2015)

Ukrainian presidential adviser: Russia must be defeated before we sit down for talks 02.08.2022

Mykhailo Podolyak is a special adviser to the Ukrainian president. He spoke to DW about the war's progress and why his country will not consider negotiations with Russia right now.