Dozens of professional Russian soldiers are facing trial after abandoning a training base, according to media reports. The soldiers were allegedly pressured to "volunteer" for fighting in Ukraine. 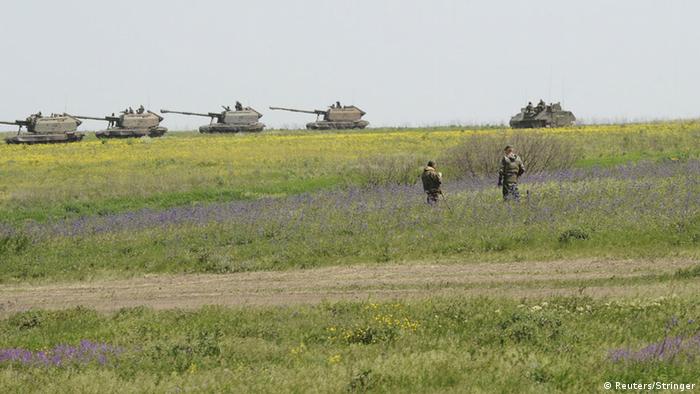 The troops were reportedly offered money and benefits from people in uniforms without insignia. The people then tried to motivate them to join the war in Ukraine, according to an article published Saturday on well-known news site Gazeta.ru.

The media outlet also claimed that dozens of soldiers left their posts out of fear of being illegally deployed across the border in Ukraine to fight at a time when Russia is not officially at war with its neighbor.

"They all have the same story. They all served together in the same unit," Tatiana Chernetskaya, a lawyer representing five of the soldiers, told the AFP news agency.

Chernetskaya confirmed to AFP that "dozens" of freely enlisted soldiers faced tribunals for abandonment of duty, after suggestions they they fight in Ukraine.

"They weren't directly forced to go to Ukraine. People came to the unit to canvass them to go," she said.

At the same time, the Russian Defense Ministry denied dozens of soldiers were involved, saying that only four soldiers named in the report are under investigation for "disciplinary offences," the Echo of Moscow radio station reported.

The Kremlin has repeatedly rejected accusations by Ukraine and Western countries, whose governments claim Moscow is providing troops and weapons to pro-Russian rebels in Ukraine. Instead, Moscow has maintained that only Russian volunteers are engaged in the fighting.

Junior Sergeant Alexander Enenko told Gazeta.ru that he saw uniformed people trying to persuade soldiers to fight in Ukraine while he was stationed at a training base in the Rostov region of southeastern Russia, only 80 kilometers (50 miles) from the border to Ukraine.

According to Enenko, the unknown recruiters promised 8,000 rubles (127 euros, $142) per day of fighting in Ukraine, as well as various benefits for the troops.

"I know for a fact, from my fellow soldiers, that they would bail out on the money, nobody would get anything," 22-year-old Enenko told Gazeta.ru.

Gazeta.ru also published a handwritten statement by another soldier, Pavel Tynchenko, who has been charged with going absent without leave.

In the statement to the judge of the military tribunal, Tynchenko wrote, "I did not want break the oath I swore, and did not want to take part in military actions in Ukraine."

The news website also cited official statistics on the garrison's military tribunal in the city of Maikop, saying it convicted 62 soldiers of going AWOL in the first half of 2015. In contrast, there was only 35 such convictions between 2010 and 2014.

Up to ten years for deserters

According to Chernetskaya, the soldiers did not want "to find themselves in battle" so they fled the training base for southern city of Maikop, where their unit is based.

"They went back to Maikop and started writing resignation letters but these were not accepted and this all led to the launching of criminal cases," she said, adding that four of her clients have been charged with going AWOL while one is charged with the more serious offence of desertion.

Russian laws call for sentences of up to five years in prison for being absent without leave, while deserters face a maximum sentence of 10 years.