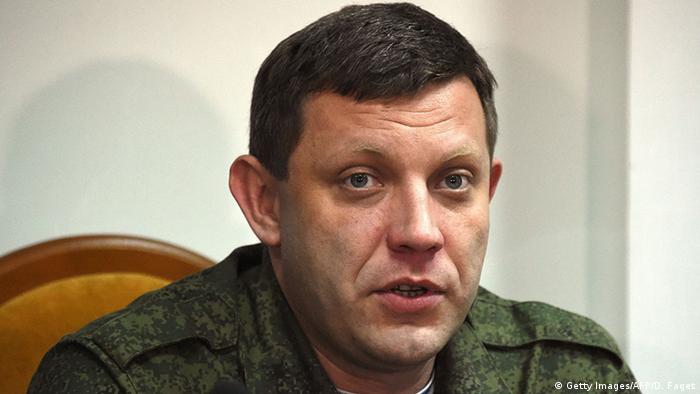 Alexander Zakharchenko, the rebel leader in Ukraine's eastern Donetsk region, eschewed his usual military fatigues in favor of a suit for the recorded statement that was broadcast on Russian TV on Tuesday.

Zakharchenko slammed Kiev for a "lack of willingness to solve the problem in a peaceful manner."

He ordered his forces to hold their fire, and urged Kiev to do the same.

"It will be strictly forbidden for any unit of the people's militia of the Luhansk republic to open fire in response to shooting or any provocation from the side of the Ukrainian army and national guard," said Plotnitsky, of the self-proclaimed Luhansk People's Republic.

Pro-Russian separatists launched their violent succession movement in April 2014, when they seized a regional government building. Since then more than 9,500 people have been killed in the fighting.

Prior to the separatist uprising, Russia occupied and annexed Crimea from Ukraine after the country's pro-Russian president was forced to flee to Russia amid mass demonstrations calling for closer ties with the West.

The Ukraine government and the rebels signed a peace agreement in Belarus last year. Named after the Belarusian capital, the Minsk agreement was never implemented. However what had been a state of war seemed to morph into a low-grade conflict that nonetheless continued to claim lives on both sides.

Tuesday's announcement is the first time the rebels advised they would unilaterally hold their fire.

But in the run-up to the announcement it appears that at least six fighters were killed - three on each side. Another 15 government solders were wounded, and one more is missing.

A few hours before the rebel announcement Ukrainian President Petro Poroshenko reported that he expected parliament to soon vote on constitutional amendments that would grant the two eastern provinces greater autonomy.

He said he expected the vote to come "in the nearest future."

The president's office also announced that Poroshenko would be meeting with the foreign ministers of Germany, France, Britain and Poland on Wednesday. They are likely to discuss a Ukrainian settlement deal.

German Foreign Minister Frank-Walter Steinmeier said that, after discussions with Ukrainian and Russian officials, it would be possible "to agree now, and without preconditions, on a durable cease-fire."

"Our proposals are on the table, for making the cease-fire permanent and for the political process," Steinmeier said. He added that he would discuss with Ukrainian lawmakers ways to get the Minsk process moving.

Human rights groups accuse both the government and Russian-backed rebels in eastern Ukraine of secretly abducting and imprisoning civilians. David Stern in Kyiv looks at why some say this is only part of the story. (02.09.2016)

Prisoner swap between Ukraine and Russia